In case it hasn't been made clear enough by my giddy review or the numerous follow-ups we've done here at ComicBook.com, I thought Pete Travis's Dredd, in theaters today, was a work of genius. A beautifully-executed film rich with action, dark humor and big, exciting set pieces, it was, for my money, the best comic book movie of 2012, hands down.

And I did not go into the experience expecting it to be so. I expected, frankly, that maybe it would give The Amazing Spider-Man a run for its money and that the two would duke it out to see who would come third behind Marvel's The Avengers and The Dark Knight Returns. A lackluster trailer and virtually no discernible promotion from Lionsgate led me to go into the Comic-Con screening with subdued expectations, which were blown away by the beautiful, horrible spectacle on the big screen.

And there were, of course, moments that stand out in your mind, since even the best films rarely stomp on the gas and never slow down to take a corner, so to speak. Here are five of them, for your consideration. 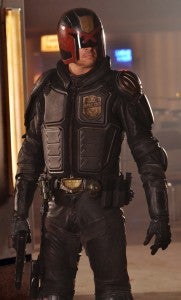 When Dredd first appears here, it's exactly what was needed. He's doing his duty as a Judge, and it's action-packed and visualliy interesting and creative but it's not overwrought and it's not the thing that the 1995 movie Judge Dredd did exactly wrong. I remember seeing that film for the first time and even at 15 thinking, "Wow, that's pretty stupid" when a gunman at a high elevation inside of a building turned to his buddy and said something along the lines of "Oh, crap, it's Judge Dredd! Now we're really screwed!" For the purposes of the audience, Dredd is the A number one bad-ass in Mega City One. In the context of the film, he's just another cop, even if he's one who's been in the papers a bunch of times.  Seeing him proving his bad-assery by actually acting that way, rather than preening in front of a building and waiting for the perps to give up or come after him, is a way more effective establishing beat for the character.

There's a sequence where someone goes down an elevator shaft, and while it's not in and of itself a high point of the plot, it was instrumental in my realizing what exactly was being done with the Slo-Mo effects. In the trailer, it looked as though the effects were being used rather arbitrarily and in a way that seemed a little too arty and pretentious to be Dredd. That feeling nagged me for the first couple of scenes in which the effects were used, including Ma-Ma's bath from the trailers and the car chase mentioned above...but when the elevator shaft scene occurred, suddenly I realized what it was they were doing with the 3D and the Slo-Mo, how the director was trying to use the shiny new toys he had in his box in a way that wasn't the same as everyone else already had, and how well it was working. After that, it was a bit like Sin City. You'd see something every so often where you'd say, "Was that really necessary?" But the answer came back yes instead of no.

Kay is the murder suspect at the center of much of the story. They carry him around with them for a good chunk of the movie, using him alternately as a human shield, a guide to Peach Trees and of course just a prisoner. One of his numerous escape attempts backfires in a big way, as he tries to psyche out Judge Anderson, only to have her get literally in his head with her psychic powers. Suddenly all of his big talk about the nasty, sexual things he would do to her if only he weren't in handcuffs seem a little small when he's got a 110-pound woman making him wet himself.

I can't even begin to imagine how many shots were fired during the "big shoot-out" scene in the film, during which Ma-Ma and her people get behind a massive, rapid fire cannon which blows through walls, killing about a dozen innocent bystanders and eradicating much of an entire floor of the Peach Trees block.

It's the moment that's designed for people to look back and say, "Holy crap, remember that?"

And that, of course, is pretty much what this whole column is.

This one's kind of a sequel to an earlier moment, as it plays with the dynamic between Kay and Anderson--but it also plays with the way Judges are perceived in the world of the movie. Apparently it's not widely known that the Lawgiver pistol (the weapon used by Dredd and other Judges) is coded to the DNA of the person it's assigned to. If someone else tries to use it, there are...well, consequences.

So with Anderson injured in combat, Kay finally gets the better of her, as she's unable to really fight back particularly well. She's also dropped her gun, so he takes it in the hopes of blowing her head off--but the gun knows what's up, and it incinerates itself (and Kay along with it) in a spectacular moment where the effects really take it to the next level, since anyone with a basic Dredd history will have known before he pulled the trigger that it would end badly for him.

Honorable mention: "I am the law."

Judge Dredd's catch phrase, the one thing many Americans know about the character, would have been easy enough to downplay or avoid considering the way it became a punchline following the Stallone film. Instead, it was embraced, used in trailers and played very straight in the film. The reason it worked? Karl Urban has a chilly confidence and an air of fanaticism that works really well as Dredd. There are no consequences to his making that statement because it's just, obviously, true. Also, since nobody need to be convinced--they all known it deep down, right?--it's delivered with a cool head, not bellowed like Rambo after a bender.