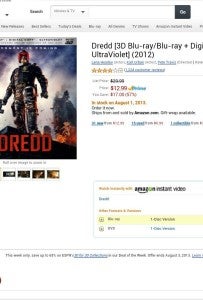 While copies will be back in stock on Thursday August 1, Dredd 3D is currently out of stock at Amazon's U.S. website.

Why's this notable? Well, because the last few months have seen a number of statements from Lionsgate and the film's star Karl Urban to the effect that a sequel to the cult-favorite sci-fi comics adaptation was--against all odds, given the film's modest box office performance--still on the table. Fans, they say, should buy the DVD and Blu-Ray, write to and tweet at the studio.

Fans have taken it to heart--with a petition to Lionsgate that has over 50,000 signatures on it and an aggressive purchasing campaign that seen the movie shoot up to #21 worldwide on the Amazon Blu-Ray charts (it was in the top 20 yesterday). Spearheaded by the Make a Dredd Sequel movement on Facebook, fans have also made it a hot item on Netflix, where it's only available on disc.

“The more people that campaign for it, the more people that email, Twitter, write-in to Lionsgate saying ‘we want to see more of this,’ then the more likelihood we will get to see it; we’re certainly doing everything we can to make sure it happens,” Urban told reporters in San Diego last week, and then echoed those sentiments a few times throughout the weekend.

The star, a longtime Judge Dredd fan who famously refused to remove his helmet onscreen in deference to the comic book source material, has been a champion of more Dredd since before it hit theaters.

The film was reportedly conceived as the first part of a trilogy, with other elements including the Dark Judges and a trip to Cursed Earth planned for prospective sequels.

Dredd Blu-Ray Is Sold Out at Amazon