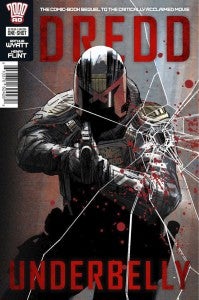 A forthcoming collected edition of Dredd: Underbelly--the comic book sequel to the 2012 film Dredd 3D--will hit stores in January. It will be the first time that 2000AD have released a title aimed specifically at the U.S. market. In the past, American editions of 2000AD content have been handled by other companies licensing their material, or the standard versions of 2000AD titles have been imported from the U.K. Rebellion, who publishes the magazine and produced last year's movie, has been releasing collected editions of material aimed at American readers since 2010, when it signed a distribution deal with Simon and Schuster, but has stayed away from releasing material into the comic book store direct market except in the case of Free Comic Book Day specials. "We've noted a real swell of US interest in Dredd off the back of the film," Smith told The Hollywood Reporter. "This first foray for 2000AD in producing a US-format book, geared specifically to the [comic book] direct market, and aimed at satisfying those demanding a sequel, is a stumm gas grenade-style lob across the Atlantic to show that you don't have to camp outside your local multiplex to get your next fix of Mega-City One -- the Judge will carry on enforcing the Law through the pages of the comic. Arthur and Henry have created a terrific story, and a powerful follow-up to the film - Dredd fans won't be disappointed." Dredd: Underbelly collects the story from Arthur Wyatt and Henry Flint serialized earlier this year in Judge Dredd Megazine and will be released in comic stores, as well as through the Kindle Fire, Nook and 2000AD iPad app.