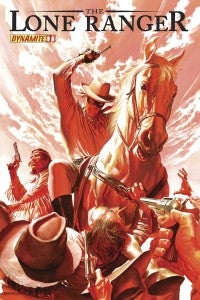 He's living to ride again another day!  Dynamite Entertainment announced today the return of one of their most well known characters, The Lone Ranger.  According to the official press release, the masked man returns with a new #1 in January 2012 as an ongoing series. This new The Lone Ranger comic series kicks off with a six-part story called "Hard Country." To allow new fans to jump into the series, the first two issues will be included within a larger story. It will then move into a longer, serialized tale, respecting the excellent template provided by Brett Matthews and Sergio Cariello with John Cassaday, setting off on a new trail. At the end of the Matthews series, The Lone Ranger and Tonto were ready to strike out in the old west, fighting for what is right and helping those in need. "Hard Country" is about the old west striking back - a harsh environment where only the tough really make it. This is the story about these two American legends, early in their development, as they learn this bleak reality. While they're not going to fold, they will come to see that this is a hard task they've set for themselves. A hard task in a vast "hard country." "The Lone Ranger #1 begins our Hard Country arc with a heart-breaking tale of loss that holds a mirror up to John Reid's past," says writer Ande Parks. "The man John Reid has become in his The Lone Ranger identity was shaped by tragic loss. Now he sees that loss on the faces of a new generation. Can one man make a difference in the lives of a father and his children whose world is crumbling? The Lone Ranger is damn well going to try!" "Kudos to Ande and Esteve doing an incredible job leading in to The Lone Ranger #1 and following up Brett, Sergio, and John's series so successfully with The Lone Ranger: Death of Zorro series, which has received a considerable amount of critical acclaim," said Dynamite President and Publisher Nick Barrucci. "The Lone Ranger: Death of Zorro showed fans that Ande and Esteve were the right successors for the series. They "know" The Lone Ranger, and are making the series their own. Fans will be excited when they read the first issue, and with covers by Award-Winning artists including an Alex Ross painted cover and Francesco Francavilla as the ongoing cover artist, The Lone Ranger will be a must-read book!" "The Lone Ranger is arguably the most popular Western character of all time and we are thrilled to team up with Dynamite Entertainment to introduce fans to another adventure," said Nicole Blake EVP, Global Marketing & Consumer Products, Classic Media.