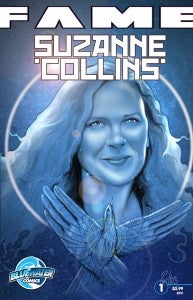 Author Suzanne Collins is on a roll. With a best selling trilogy "Hunger Games," a screenplay adaptation under her belt, and an upcoming film version of her trilogy, she's all over the place. Now she's being featured in a comic book from Bluewater Productions. "Fame: Suzanne Collins" explores the life story of the author and how she came to prominence. The book is written by Sara Gundell with art by Ni o Harn Cajayon and Joe Phillips providing the cover art. "Suzanne Collins has already wowed legions of fans with her 'Hunger Games' books, yet most know very little about the woman herself," said Gundell. "With the movie version of 'The Hunger Games' coming out next year, it seemed only fitting to share her story with fans." Darren Davis, president of Bluewater Comics, said he is excited to promote the story of a person who makes reading fun for kids. Recently, Bluewater announced that they are creating lesson plans around their biographical comics. The Collins book seems like a natural fit for that program. With so many kids as fans of 'Hunger Games', it only makes sense that this comic book would be an easy way for them to learn about the author. Says Gundell, "It's fascinating to see how Collins' own life helped influence and shape the books that would one day make her famous the world over," said Gundell. "With 'The Hunger Games' movie coming out in 2012, her following is only going to grow. " We're guessing this comic book will help her following as well.