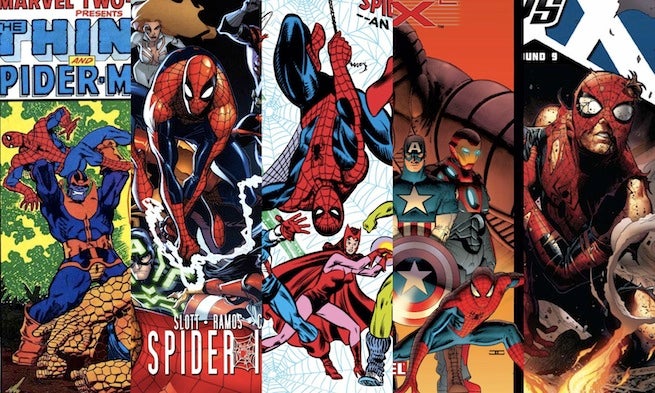 With rumors continuing to circulate about Spider-Man eventually being worked into a future Marvel Studios film in concert with the Avengers, we thought we’d take a stroll down memory line and highlight some of the Wall Crawler’s greatest moments with Marvel’s mightiest superteam. These five storylines (listed sequentially) feature the best of the best when it comes to Spider-Man and his membership (or in one case, his almost membership) with the Avengers, and demonstrate what a winning combination both these properties can be.

While not technically a member of the Avengers at this point in history, in this classic Jim Starlin story, Spidey goes toe-to-toe with the mighty Thanos, sacrificing his physical well-being in order to rescue the Avengers from certain doom. In the previous installment of this arc (Avengers Annual #7), Thanos had captured the Avengers and was holding them in a containment chamber. In part two, Spider-Man and Thing team-up to try and free the Avengers, but are quickly dispatched by Thanos. Just when it loos like all hope is lost, Spider-Man does what he does best – recklessly throw his body around like a pinball. He frees the Avengers, who then defeat Thanos (with help from a resurrected Adam Warlock). Spider-Man doesn’t actually deliver any of the big blows in this story, but his selflessness saves the universe, so that's worth something, right? 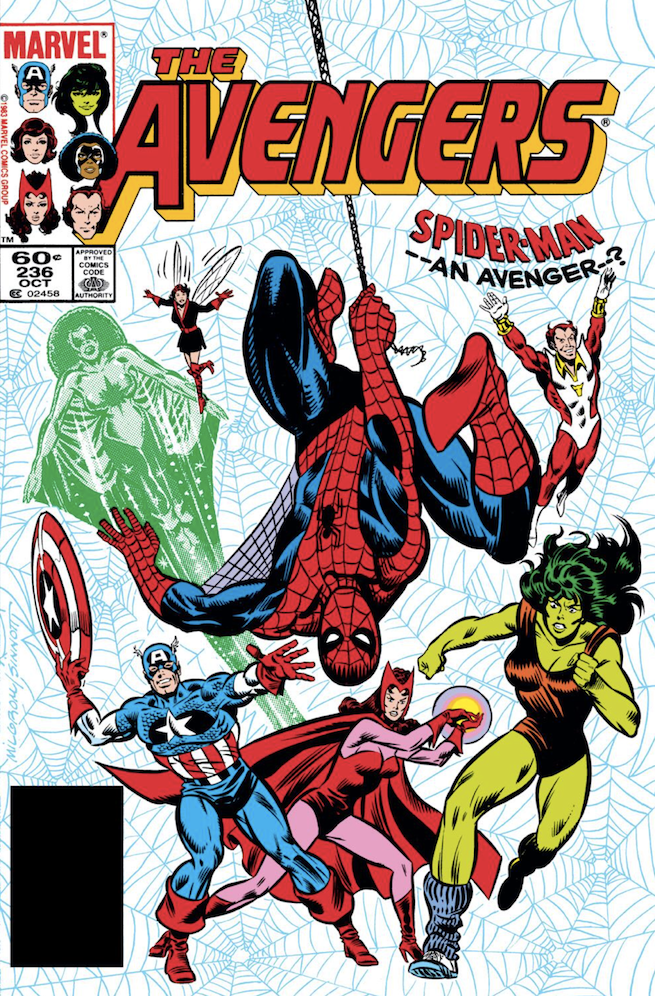 Brought to you by Roger Stern, the writer who enjoyed legendary runs scripting both The Amazing Spider-Man and The Avengers. This two-part story from the mid-80s shows Spidey trying out for “Earth’s Mightiest Heroes” – this time with feeling. In the years leading up to this story, Marvel had flirted with the idea of Spidey being an Avenger, or at least a reserve member. But here, the company finally looked like it was ready to pull the trigger ... only to bait and switch the audience again by first declaring him a “trainee” and then keeping Spider-Man off the team completely by citing a government loophole.

Still, it doesn’t take away from the absolute fun and hilarity of this story, which manages to simultaneously demonstrate all the reasons why Spider-Man is great on the team and all the reasons he has no business being part of the Avengers. Spider-Man uses his brains and skills to help the Avengers defeat the Lava Men and later Rhino and Electro, but continues to act out of turn while serving as a general annoyance to his potential teammates. 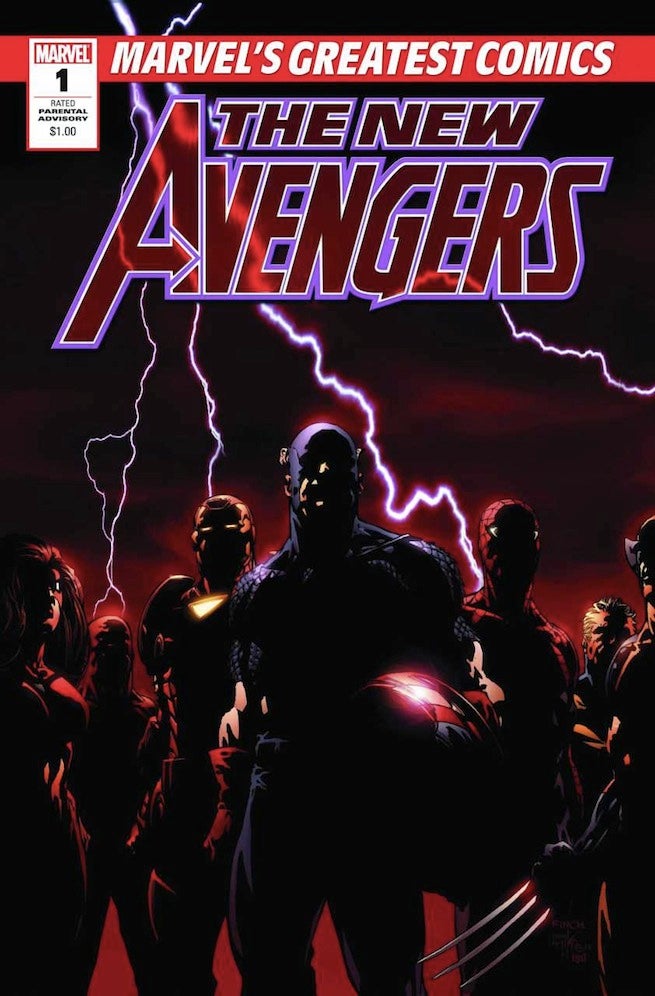 About 20 years after Spider-Man’s failed tryout with the Avengers (see the previous entry), Marvel finally went ahead and made his membership to the group official in this historic storyline from Brian Michael Bendis. "Breakout" follows a mass prison break at the Raft, Marvel’s newest supervillain holding facility. Interestingly enough, the breakout is orchestrated by longtime Spider-Man foe (and fashion expert) Electro. Spidey bails on a movie night with Mary Jane to go respond to the chaos at the prison and runs into various members of the recently disassembled Avengers.

After dealing with the riot the best they could (which includes Sentry flying into space and ripping the villain Carnage in half), Captain America and Co. decide to reform the Avengers, dubbing themselves the "new" Avengers. In one of the better scenes in Spider-Man/Avengers history, Steve Rogers approaches Spidey about joining the group and the Wall Crawler initially rebuffs him, talking about his long-term loner status (which also harkens back to Spidey's first ever attempt to join the Avengers in Amazing Spider-Man Annual #3). Rogers, always one to cut to the quick, bluntly asks the battered and bruised Peter "how’s that working out for you … that not being a 'team guy' thing?" Rogers for the burn! 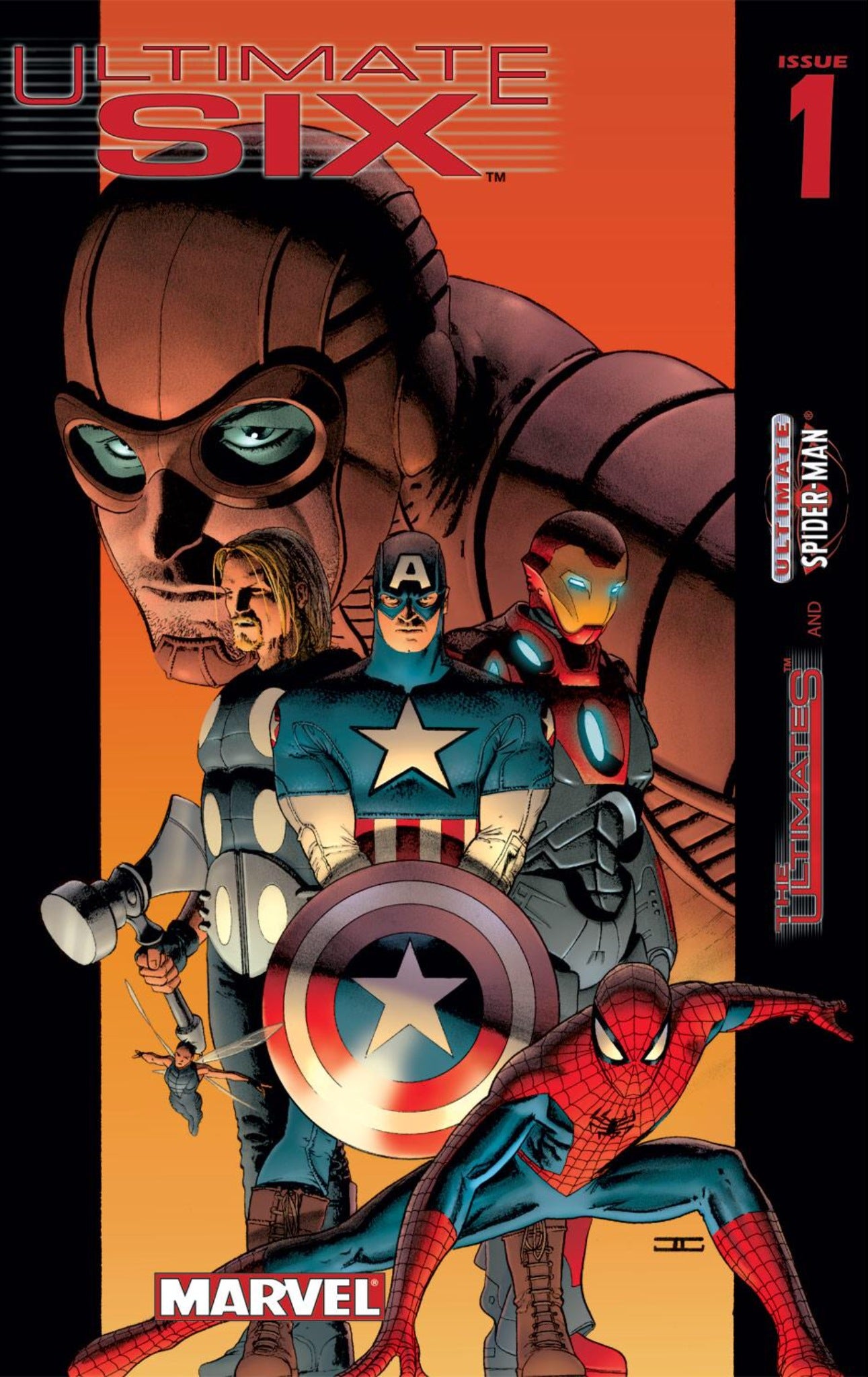 Switching over to Marvel’s Ultimate Universe, this seven-part miniseries that ran between 2003-2004 by Brian Michael Bendis brings together Ultimate Spider-Man and the Ultimates (aka, the Avengers) for the first time ever, in an epic battle against Norman Osborn/Green Goblin and his villainous compatriots, the Sinister Six.

When the brash Ultimates meet Spidey for the first time, they quickly dismiss him as just some kid. But he immediately proves his mettle when Osborn, Kraven the Hunter, Electro, Sandman and Doctor Octopus (Spider-Man was meant to be the sixth member per Osborn’s machinations) launch a strike against the White House. The heroes successfully beat back the Sinister Six and capture Osborn, whose son, Harry, swears vengeance on Peter for betraying his father.

Sony’s Sinister Six movie has been rumored for more than a year now, but an adaptation of Ultimate Six would allow Sony and Marvel to collaborate in a way that could work in most of their highest profile properties in a single film. Plus, no one could ever complain that Marvel movies don’t have great villains, when you can inject the likes of Norman Osborn and Doctor Octopus into a film. 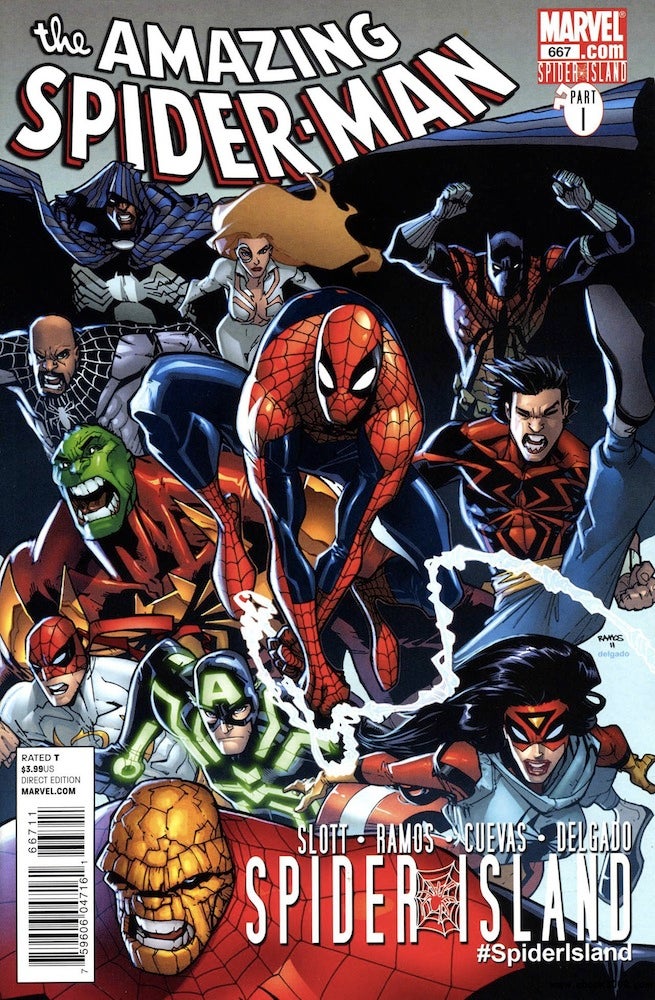 In the 2011 storyline that very well might be the ultimate love letter to Peter Parker, Dan Slott scripts a sprawling epic about a virus engineered by the Spidey villain the Jackal that gives all of the regular folks in Manhattan spider powers (before ingloriously transforming them into giant spider monsters). One of the main spder monsters happens to be none other than Steve Rogers, who has been enslaved by an old World War II adversary, the Spider-Queen. So it’s up to Spider-Man and the Avengers to work together to find a cure and save Manhattan from this terrible plague.

As the story progresses, the Avengers eventually find themselves fighting off the Spider-Queen’s minions on the street level, while Peter breaks out to find a way to reverse the effect’s of Jackal’s virus. Using a mind-control helmet from Doc Ock (a helmet that would later help Otto take control of Peter’s body in Superior Spider-Man), Peter guides an army of Octobots to deliver a cure to all of the infected New Yorkers. Meanwhile, the Avengers successfully use their collective might to defeat the Spider-Queen.

While "Spider Island" is a great demonstration of how the Avengers and Spider-Man can work together, the storyline also accentuates what makes Spidey so special – the guy under the mask, Peter. In a world where everyone has Spider-Man’s powers thanks to the Jackal’s virus, it’s up to Peter to save them all, and save them he does. 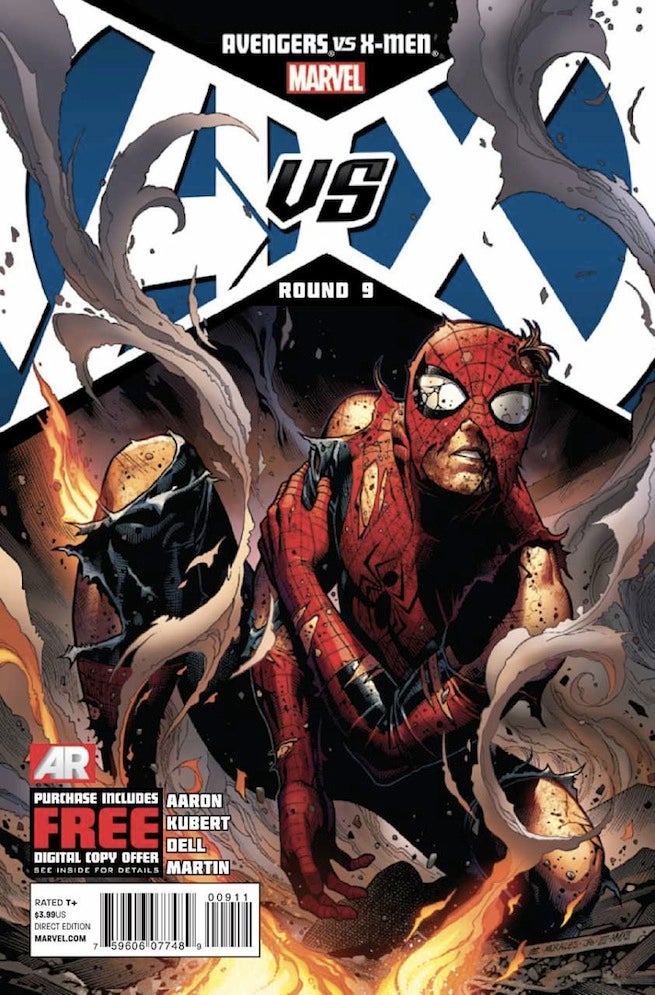 Spider-Man is certainly not the biggest or strongest Avenger, but he undoubtedly got a chance to shine in this one installment of 2012’s big summer event, Avengers vs. X-Men. Written by Jason Aaron, AvX #9 is almost exclusively told via Spidey’s perspective, as he gets the living snot beaten out of him by the super-powered Phoenix Five. Aaron really keys in on Spidey’s voice, oscillating between the character’s trademark sense of humor and the desperation/despair he is experiencing as he faces certain death at the hands of his adversaries.

However, in a scene that’s reminiscent of Flash using his speed and guile to slow down the Anti-Monitor in Crisis on the Infnite Earths, Spider-Man staves off the elimination of the Avengers when he convinces brother/sister duo Colossus and Magik to fight each other for their portions of the Phoenix Force, causing both to collapse in defeat. It very well may be Spider-Man’s greatest moment as an Avenger (which just so happened to be published during his 50th anniversary month of August, 2012).