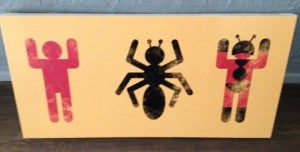 Marvel Studios and Scott Pilgrim Vs. the World director Edgar Wright have both been very busy for the last few years, so you'll excuse them for not having a solid release date for the Ant-Man film they're reportedly planning to make together.

Still, fans are eager to see it and Marvel President Kevin Feige keeps saying that the project is "closer than ever" to becoming a reality, so when Wright takes to Twitter with a cryptic message relating to an Ant-Man image, everyone immediately jumps to attention.

"Received this in the mail. What can it mean?" Tweeted the director, including a photo of what appears to be a sign or poster relating to Ant-Man. It looks a bit like those Mondo posters that have been made for The Avengers, with a very stripped-down, pop-art sensibility, but it seems almost equally likely that he just received it from a fan and is using the opportunity to tease his Twitter followers.

Still, MTV's Splash Page is among those taking it as a sign that there will be an Ant-Man movie announcement on the horizon. Care to join in the fun?