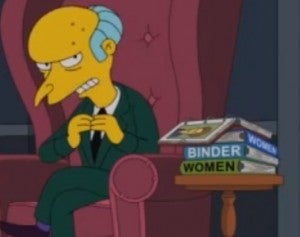 Not to be outdone by a mere multimillionaire like Joss Whedon, evil billionaire C. Montgomery Burns from Fox's The Simpsons appears in a new video endorsing Republican Presidential candidate Mitt Romney. "Release the hound!" Burns orders an underling, who brings out Mitt Romney's dog, still shell-shocked from having spent 650 miles riding atop Romney's car. He proceeds to ask the dog who he likes better: Romney or Obama. The dog, for its part, makes a decision many Americans wish they could make in the days before the election.