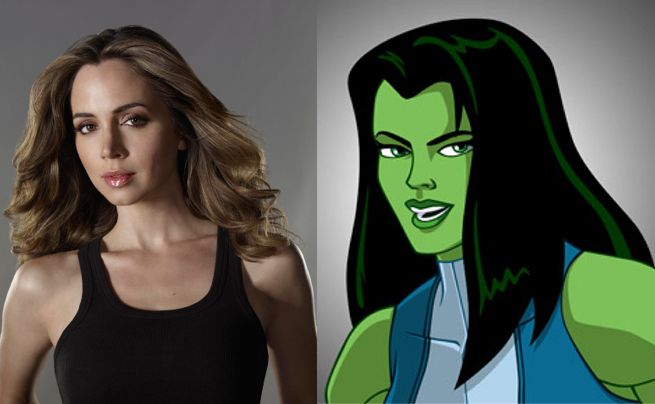 Comicbook.com covered Fandomfest in Louisville, Kentucky this weekend. During the event, Eliza Dushku was asked what she thought of all the Marvel Comics movies.

Dushku said, "I enjoy it, but I'm not one of those people that's like, 'Hey, they ruined it, because they didn't fix that one detail of that character.' I don't like assassinate the creators of the art when it's not on point. I think that it's a representation and doesn't necessarily ought to be on point."

In regards to what character she would like to play if she could pull some strings with Josh Whedon to be in the Avengers, Dushku said, "I don't know. I feel like Scarlett Johannson said recently, I'm not going to be comparing myself to her, but she said something like, 'I consider myself an actor for hire. And if somebody is inspired and sees me in a certain way that's exciting.'"

"And I mean I've been voicing the green chick, She-Hulk, now for two seasons," added Dushku. "We're in our second season of Hulk and the Agents of S.M.A.S.H. And that might be kind of fun."

Eliza Dushku Wants To Play She-Hulk In The Avengers

Is One Piece About to Get a Special Vans Collection?