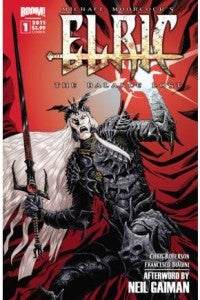 Any time a new series, be it ongoing, limited or mini, is released with issue #1, it's a roll of the dice. You never know if the public is going to eat it up and love it or simply spit it out. In the case of Boom Studios' Elric: The Balance Lost #1, it's a bit of both. There's tons of rich history with the character of Elric, who originated in the works of Michael Moorcock during the 1960s and 1970s, later making an appearance in comic books in Conan. Introducing this character to a new audience is no easy task, as he has his own rich mythos and background story that devoted fans are well aware of. For those just getting to know Elric this new series seeks to educate them on his aspects. The first issue feels very uneven and hurried in places, with several elements off-balance in the foundation of the storytelling.

The reader is made aware of the vast multiverse, and Elric's role in helping to maintain balance and order in this gargantuan responsibility. Issue number one seeks to lay out for us the key players in this unfolding tale, such as Elric himself, along with another world's Dorian Hawkmoon, and what appears to be our world's Eric Beck, a video game designer who is continuously plagued by highly detailed and disturbing dreams, whose symbols and images keep popping up in his waking world.

What unfolds is each characters current story and situation, with Elric battling bloodthirsty hoards on one world with his sword Stormbringer, Dorian hearing fearful tales from his daughter about a supposed long-ended and vanquished foe, and Eric, who continues to attempt to make sense of the visions and dreams he's having. There's also a bit of a distracting subplot with his twin brother that, in this inaugural issue, serves as an unnecessary distraction from the other matters at hand. The details in each story are layered over each other enough that Eric obviously has something to do with these various disturbances and unsettling feelings occurring in the other parts of the multiverse.

The story has plenty of potential to develop into quite an epic arc, but the first issue almost collapses a bit under its own weight. So many characters, names, backstories and locales are introduced in this first issue, that it feels more like a formality as opposed to the laying of a solid foundation to a sprawling narrative. You MUST read the inside of the cover page, as it does provide a needed an useful guide to how the story is set up. Elric: The Balance Lost does have potential to be an effective piece of storytelling as far as action and a "cast of thousands" is concerned, but the characters are given perfunctory attention in this first issue, leaving an overall feeling of disappointment. Not the sort of beginning that a guardian of the multiverse was hoping for!

"Elric: The Balance Lost #1" an Odd Mix of Potential and Overkill