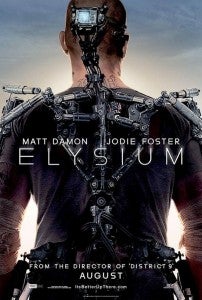 Elysium got off to a solid start for the weekend with Thursday night shows starting at 10 PM bringing in $1.6 million. It was better than last week's opening night performance of 2 Guns, which brought in $1.3 million.

While this weekend is likely to be a competitive one at the box office with several new films opening, Elysium appears to be the early pick to win the weekend. In addition to Elysium, We're The Millers, Planes, and Percy Jackson: Sea Of Monsters are all opening this weekend.

We're The Millers and Percy Jackson: Sea Of Monsters actually got off to an early start by opening on Wednesday, and both films are expected to do in the $30 million range during their first five days. Planes is expected to finish in the low $20 million range, and Elysium should win the weekend with between $30 million and $35 million.

Elysium is a science fiction movie starring Matt Damon and Jodie Foster. The film is written and directed by Neill Blomkamp, who is best known for writing and directing District 9. Check out Comicbook.com's exclusive interview with NASA's Mark Uhran on the feasibility of the film's space station.