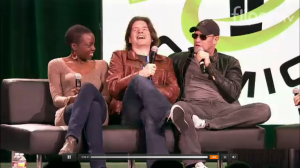 During today's Talking Dead panel at Emerald City Comic Con in Seattle, actors Danai Gurira (Michonne) and Michael Rooker (Merle Dixon) were holding court, talking about their characters on AMC's The Walking Dead, when a question came from the audience.

"We're doing questions now?" Rooker asked, puzzled, when a man stepped forward from the audience, telling Rooker that it's his biggest fan.

Rooker was perplexed (possibly becuase he's wearing sunglasses and a hat at an indoor stage), but Gurira immediately recognized the man: "David!" She shouted.

The man, The Walking Dead artist Charlie Adlard, sported an English accent that apparently got him confused for David Morrissey, the actor who plays The Governor on the hit series--but when he stepped up to the stage, he was identified, through hugs and praise, as the man who drew almost every issue of The Walking Dead--and the t-shirt worn by the panel's moderator.

More on this panel later...