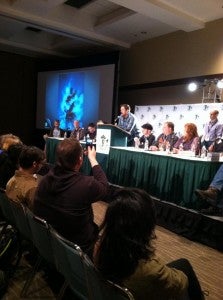 Tucked away in the back of last week's Nightwing #17, featuring one of the final appearances of Damian (Robin) Wayne, was one of DC Entertainment's "Channel 52" news pages teasing a move for former Robin and current Nightwing Dick Grayson. Lest anyone fail to pay attention to Channel 52, Nightwing writer Kyle Higgins crashed the DC Comics - The New 52 panel to reiterate the message to the audience: Nightwing is moving to the Windy City just in time for C2E2. Yeah--that's a lot of nicknames in one sentence. Dick Grayson is moving to Chicago in April, just before the Chicago Comics and Entertainment Expo. The move will take place in Nightwing #19, part of DC Comics's line-wide event month, wherein each of the New 52 titles will sport gatefold covers that hide a shocking twist on the inner flap. That initiative, formerly nicknamed "WTF Certified," will reportedly not feature any such text on the books' covers. Higgins is following in the footsteps of Cullen Bunn, who moved Venom to his hometown of Philadelphia when taking over the title. According to his Wikipedia page, Higgins was born in Lockport, Illinois, just 30 miles from Chicago. Nightwing is in a state of flux right now, having lost his job and much of his supporting cast up to this point in the Death of the Family storyline that just wrapped. With the death of Damian Wayne, the apparent disfigurement of Red Hood and now the Nightwing moving to Chicago, it appears as though The Joker's stated goal of stripping Batman of his support network has largely succeeded, even if he had nothing to do with Damian's death. Chicago, of course, stood in for Gotham City during much of the filming for director Christopher Nolan's Dark Knight Trilogy.