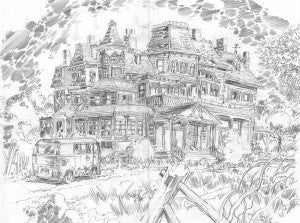 Could this be the first new title Rob Liefeld takes over following his abrupt departure from DC Comics?

Erik Larsen announced about an hour ago via Twitter that he will conclude his one-year run on Supreme after issue #68, an oversized issue that will allow him to tell a number of solo stories featuring different characters from the series.

"After much thought I've decided to end my run on Supreme with issue 68 and make it an 80-page giant," Larsen tweeted. "I can do more cool s--t that way.

"Supreme #68 won't be all one big story; there'll be solo stories for Squeak, Sister Supreme, Lion-Headed Supreme and Original Supreme as well. The idea is to fully set the stage for whatever follows. To say: this is the world--these are the players.

"Make no mistake, I had a ball on Supreme and Rob Liefeld has been extremely supportive and hands off. He's let me run wild with it. But the reality is--I have a million things of my own I want to do and I can't do everything. Something had to give."

Among those projects? Focusing on Savage Dragon, trying to get more issues of The Next Issue Project onto the shelf--and working out the mysterious teaser image pictured above, which he says he's got a full issue written and penciled for. The cryptic image first showed up way back in September of 2007 and has been periodically referred to by bloggers and even Larsen since.

He added that while he and Cory Hamscher will continue to work together on the main feature in Supreme for the next couple of issues, there will be backup features that will be drawn by other creators.

For Liefeld's part, the task of assigning a new creative team falls to him (assuming he won't take on at least the writing himself), but he seems pretty content with where this book ended. up.

"Erik has my favorite run on Supreme to date," tweeted Liefeld. "He informed me before Comic-Con that he was finishing his run. Can't wait for the trade!

"Cory Hamscher is GREAT on Supreme. I would not leave him out of the picture unless he wanted to move on as well."