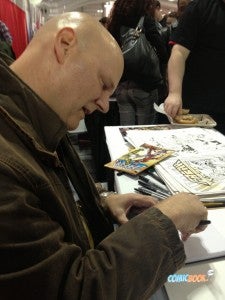 Erik Larsen, creator of Savage Dragon and longtime DC and Marvel artist before he went on to co-found Image in 1991, had the following story to share about Watchmen on Facebook the other day. We thought you'd like to read it. The fixation on endings seems particularly appropriate given the fact that Larsen's own long-running title, Savage Dragon, sees an era end this month. One of the most touching experiences I've experienced in comics is Watchmen related. I was sharing a studio with a couple other guys working for DC and it was driving us crazy waiting for those last issues of Watchmen to drop. Al Gordon, Peter McDonnell, Chris Marrinan and myself were all sharing a studio together in San Francisco at the time and, as I recall, Al has managed to get guys in the DC office to send us the last couple issues as they rolled in. They sent us photocopies before the rest of the world saw them. This was pre-Internet and it wasn't like we could spoil it for everybody and those guys in the office were a friendly, fun-loving bunch. That last issue was excruciating to wait for. Al was on their butts too and, finally, after what seemed like an eternity photocopies of the last issue arrived via Fed Ex. Al was busy inking something on a deadline, I think, and Chris started reading through the pages and he started chortling to himself. Then he fed Pete pages and I jumped in and eventually Al couldn't stand it any longer and he dug in as well. Mike Carlin and Andrew Helfer had played an elaborate practical joke on amiable Al. The first few pages played it straight but as the issue progressed dialogue was changed and characters broke the fourth wall and they were goofing off and talking to Al and it was hilarious. And I was genuinely touched that these guys cared so much and loved Al so much that they took the trouble to have pages re-lettered and reworked and pasted up just for his (and our) amusement. It was an amazing job, which had to have taken hours of their time to perpetrate. And I think we all enjoyed the joke a bit more than Al did. He wanted to read that last issue more than any of us! But I found it touching. I really did. Al called Andy or Mike (or both) and they (or he) assured him real copies were on their way for the next day and true to their (or his) word copies arrived. And, naturally, the last balloon was blacked out. Well played, guys. Well played. Savage Dragon #192, featuring the official last issue featuring Dragon as the lead character and the start of the Malcolm Dragon era of the book, will be released on October 30.