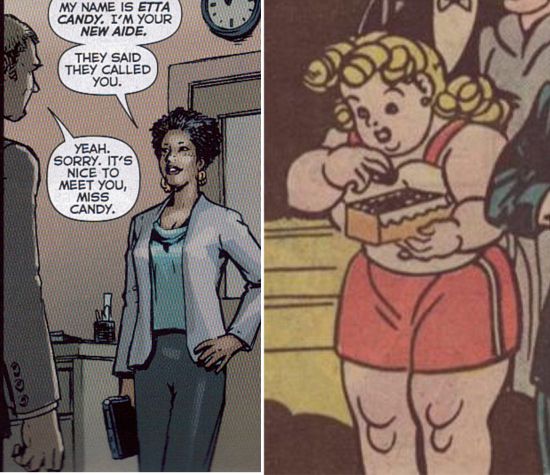 When DC Comics relaunched their entire universe, it appears that some supporting characters came out with different ethnicities. In addition to ethnic changes, some characters also seem to have lost a great deal of weight. In Etta Candy’s case, she’s actually experienced both changes.

Etta Candy is a Wonder Woman supporting character, originally introduced in the forties. While she has had a couple different looks through the years, she was most often portrayed as a heavyset white woman. In fact, one of her claims to fame was that she had a great love of candy.

In Justice League #7, Etta Candy was introduced for the first time in the new DC Universe. She is now portrayed as a skinny, African-America woman. While it’s not the first time that Etta Candy has had a skinnier look, she is best remembered as a full-figured woman, so it’s interesting that she would be initially introduced as a slimmed-down version in the new DC Universe. There has been some speculation online that Etta Candy’s look was changed to more closely match that of actress Tracie Thoms, who was cast to play Etta Candy in the new Wonder Woman TV show that never made it to air.

Other DC Comics supporting characters to undergo ethnic or weight changes in the new DC Universe include Morgan Edge and Amanda Waller. In the new Superman comics, Morgan Edge, who was previously portrayed as Caucasian, is now African-American. In the Suicide Squad, Amanda Waller is still African American, but she is now much skinner than she was in the old DC Universe.

While the ethnic changes could be applauded as DC Comics introducing more ethnic diversity into their comics, the weight changes are a little more difficult to explain. Why is it that these changes seem to be only affecting supporting characters? And why do people only go from fat to skinny in the new DC Universe? Why not a Batman with a beer belly?