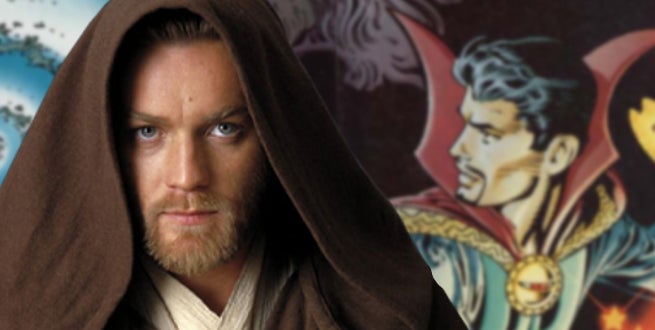 In October, talks ended between Marvel Studios and Joaquin Phoenix ("Inherent Vice") for the title role in Scott Derrickson's Doctor Strange. With the role vacant in came a sea of rumors. Everyone seemed to be up for the part.

One of the names put into the mix was Ewan McGregor, who is best known for playing a young Obi-Wan Kenobi in the Star Wars prequels. That rumor, was first reported by Badass Digest and then seconded by Variety.

So, how did Ewan feel about being a rumored contender for the Sorcerer Supreme? "Yeah, I was into it," McGregor told MTV at the Sundance Film Festival. "I thought it was exciting. I'm not a big comic guy, so I didn't know ... um ... who Doctor Strange was."

"I was intrigued by it and I liked the idea of being a superhero character," McGregor added. "But they went...  They didn't..." Ugh, why didn't he finish that last bit.

Let's finish that sentence for him, shall we? Was he going to say, "But they went ... with Benedict Cumberbatch"? It seemed like he was going to say something along those lines, and the "They" has to be Marvel Studios.

Check out his intriguing responses to the rumors in the video below.