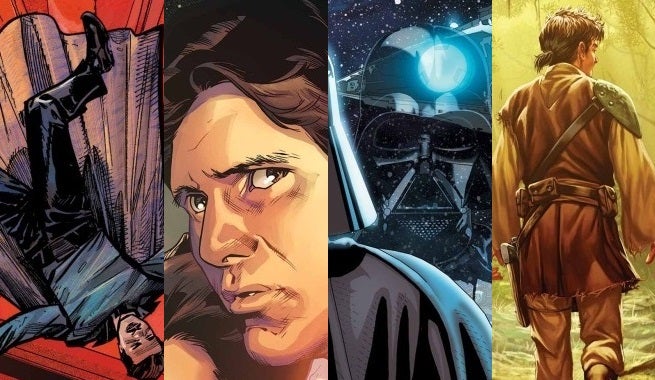 Marvel Comics has provided ComicBook.com with an exclusive first look at solicitations for the Star Wars comic book line shipping in August 2015.

August sees Charles Soule and Alex Maleev continuing the story of Lando Calrissian in Star Wars: Lando #3-4. Meanwhile, Luke Skywalker chases his stolen lightsaber in Star Wars #9, Kanan: The Last Padawan concludes its first arc in issues #5, and Darth Vader must chose between the Empire’s goals and his own in Darth Vader #9-10.

Check out the solicitations below, and see the covers in the gallery at the bottom of the page.

• Lando has made off with one of the most expensive ships in the galaxy...

• But now, one of the most deadly, effective trackers around is on his

• Get swindled by the smoothest talker in space!

• Luke’s lightsaber has been stolen and he must retrieve it!

• Meanwhile, the Imperials are closing in on Han and Leia…

• ...set upon them by a mysterious woman from Han’s past!

• Caleb has been captured by Clone Troopers Grey & Styles!

• Can he turn his back on his Jedi training completely?

• The final chapter of the secret origin of Star Wars Rebels’ Kanan Jarrus!

authorization. Text and illustrations for Star Wars are © 2015 Lucasfilm

• Vader has a new mission to do for the Empire.

• Unfortunately, it’s completely at odds with his own mission.

authorization. Text and illustrations for Star Wars are © 2015 Lucasfilm