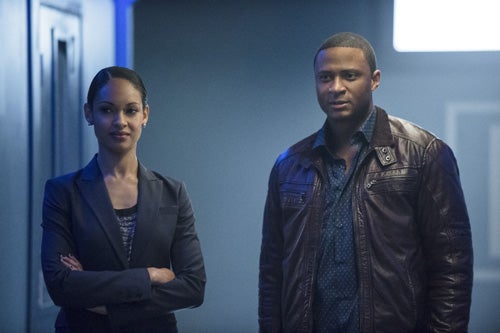 Tonight's episode of Arrow left some questions un-answered and, like the audience, star David Ramsey admitted he had questions about the future -- and about whether his character, John Diggle, will continue to find himself working the A.R.G.U.S. and the Suicide Squad after tonight. When we spoke with him yesterday, Ramsey remained mum on the future, except for one tease that we withheld until after tonight's episode had played out: "I can say this: We aren't done with the investigation of H.I.V.E.," Ramsey told ComicBook.com. "We've planted that nugget, we're going to explore that. Andy Diggle's connection to H.I.V.E., we're not done exploring that. So Diggle, Deadshot, H.I.V.E., Andy Diggle is not over." The death of Diggle's brother -- killed by Suicide Squad member Floyd "Deadshot" Lawton on behalf of H.I.V.E. -- has been a central, motivating event for the character since the series began. While nothing much is known about H.I.V.E. just yet on Arrow, in the comics they've got relationships with both Slade Wilson and Brother Blood, who are driving much of the series's main plot this year. Given the development that Deadshot/Lawton got in this episode, it wouldn't be surprising to see Michael Rowe return to reprise that role and play a part in whatever comes next between Arrow and H.I.V.E.