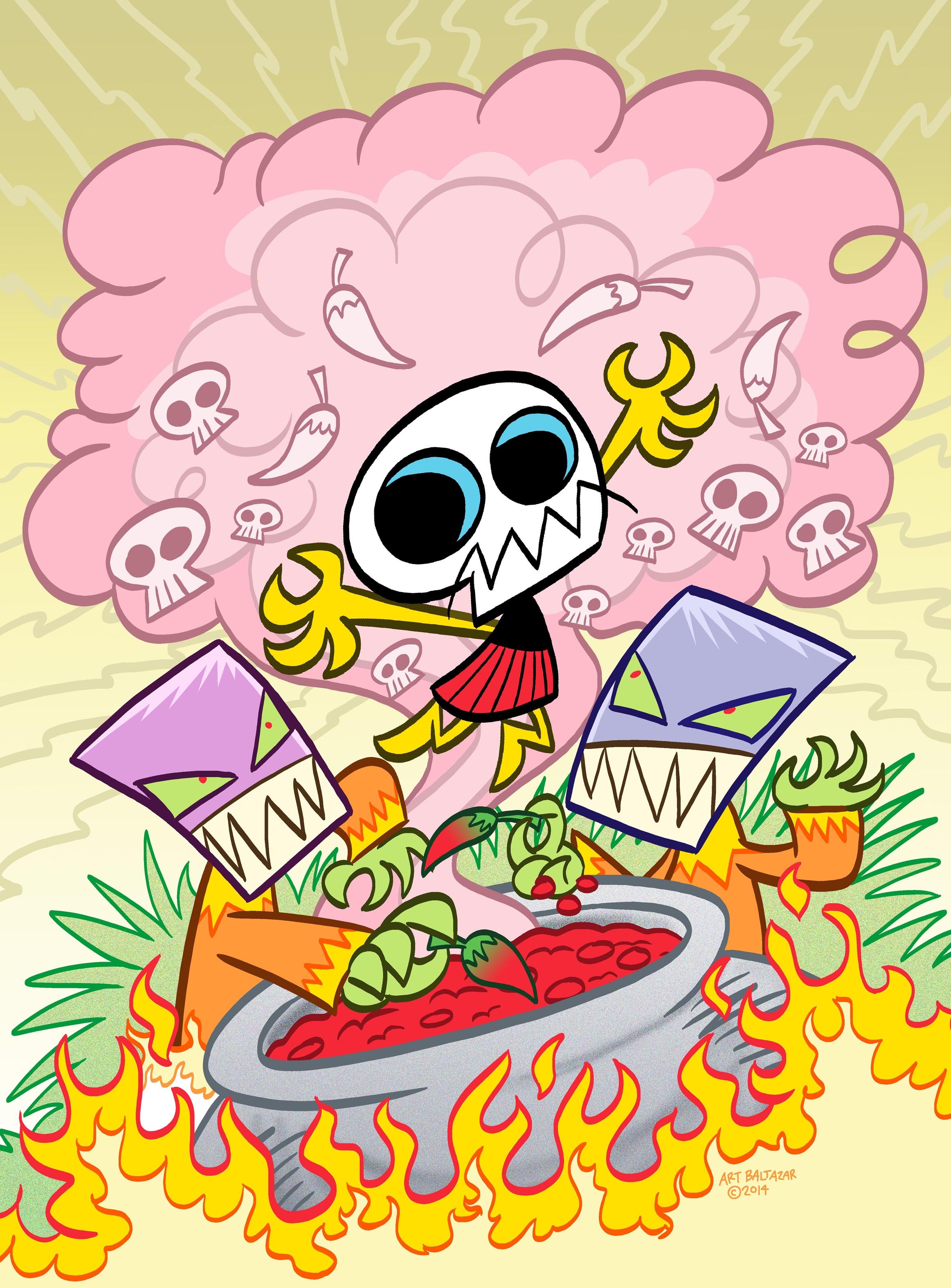 If the title throws you a curveball for a second, don’t feel too bad. “Grimmis Island” is an Art and Franco specialty that only appeared in Dark Horse’s web-exclusive anthology series “MySpace Darkhorse Presents” back in 2010. The character’s life was cut short to a single eight-page chapter, however, when the MySpace series was canceled shortly thereafter. But like Spider-Man publishing origins, “Grimmiss Island” finds new life in a fully fleshed, four-part story in “Itty Bitty Comics.”

The premise is this: A Spanish-speaking hero is conjured from a hot-pepper fueled cauldron to appease a tropical volcano goddess before she destroys her island’s inhabitants. That, and there’s a pair of talking cacti who hang out with a screenplay-writing armadillo. So, it’s the type of story you would only expect from the creators of “Tiny Titans” and “Itty Bitty Hellboy.” Here, we chat with the duo about “Grimmiss Island’s” winding origins, their relationship with Dark Horse Comics, and how they’re making their craziest work to date.

For those who have never heard of the Grimmiss character, could you bring them up to speed on his story and world?

Art: Grimmiss Island spins out of our Grim Reaper comic, which is another spinoff of Patrick the Wolf Boy. He started out in the Grimm Reaper, but we spun him out of that and gave him a new origin. So, it’s sort of connected to our Patrick the Wolf Boy universe, but also connected to our Aw Yeah! Comics universe. Grimmiss the character is the savior of an island being threatened by volcano goddess. His main purpose is to keep her happy so she doesn’t destroy the island. He was created by witch doctors that conjured him with a bunch of ingredients, including a ton of hot peppers. The hot peppers were a key ingredient in creating Grimmiss (laughs). Once the volcano goddess is happy, the island is at peace—but how long will that last? Bum bum bummm!

Nice! So how closely does this new series tie into your original short story, which ran as a web-exclusive short story in MySpace Dark Horse Presents?

Art: We’re actually reprinting those first eight pages in the first issue, so you can get the whole story. We intended to go further with the story that original appeared in MySpace Dark Horse Presents, but then that series ended and we couldn’t go any further. But we have the whole story mapped out, so you will get the whole tale. You’ll see what happens with the Mama Woogees and Big Woogee. There’s also some new Tiki Monoliths. It’s a book that’s very different from anything we’ve done before. But, when you read it, you’re going to see that it has the “Art and Franco twist,” just with our own characters. It actually seems like a lot of our projects have gotten more outrageous and weird, lately. It’s like the stuff we put into Itty Bitty Hellboy and the Mask. The Mask is really crazy. We’ve made crazy the tradition now, so it’s really just following that style.

Really? How is the crazy different this time around?

Franco: This guy is just all over the place. It’s a lot of fun. 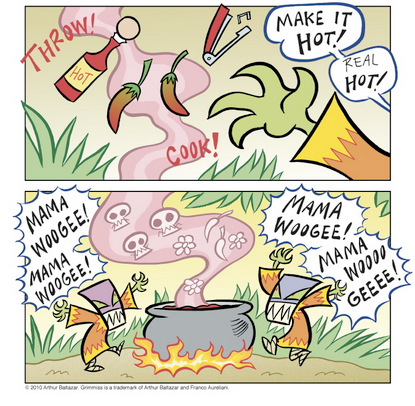 Art: The thing that I really like these characters is that none of them are human. Even our most human characters are different colors, like purple, or blue, or green. They’re humanoid. There’s even a pair of talking cacti on the island, named Cactus and Cacti. They’re just stuck in this one spot the whole time. They can’t just get up and walk away, because they’re cacti, so a lot of the humor comes from them. Cactus is just angry. He’s real bitter. He’s that guy who, when you have good news like a job promotion, will go, “Oh, so now you have to work more hours. That stinks.” He just brings you down with one sentence. You’re going to see us write an evil guy—it’s going to be cool.

That will be a cool change of pace. It’s been a while—about four years—since you last visited these characters. What made you want to pick them up again?

Art: I had a bunch of characters that I pitched to Disney a few years ago when they asked me to do that Gorilla, Gorilla series. They asked me to pitch a bunch of different cartoon ideas, which let me pitch a whole bunch of stuff. Whatever they didn’t take; I started doing on my own. So when Dark Horse wanted me to do some digital stuff, I sent them these two ideas. And ever since then, I’ve had these stories in my head. These are just the first two ideas of countless more. I have a whole sack of new characters, but these are just the two that I used since working with Dark Horse. In our conversations with Dark Horse, we asked if we could do some creator-owned stuff along with what we’d already done on their characters. So it’s pretty cool, because it’s like we’re bringing our characters to the Dark Horse universe. We can potentially meet all of the other guys now.

Franco: It was an easy choice when we were deciding which characters to use, because Grimmiss was just so much fun to write in those first issues of Grim Reaper. He was all over the place, and you didn’t know what he would do. He only spoke in Spanish. It was just weird, but it was funny. The minute we had the chance to bring someone new out, we immediately went to him. We then came up with a full premise, and put him on the island with a full scenario and everything. It just evolved as if it never stopped.

Fun! So is this a mini-series, or an ongoing? How long is Grimmiss' story now?

Franco: Right now, Itty Bitty comics is a 16-month series where we jump to a different character and story every four issues. There will probably be more issues afterward, but we have 16 mapped out so far.

That’s great news. Going back to those talking cacti you mentioned earlier, how are they going intersect with Grimmiss' story?

Franco: They can only intersect when people come to them, because they’re planted in the ground. They’re not going anywhere (laughs).

Art: They’re in the desert, so they’re not anywhere near the action. In the first part, Grimmiss runs past them, and they can only do a double take and say, “Wait, who was that?” They don't really know what’s going on. But they talk to their friend Armando, who’s an armadillo. He wants to be a scriptwriter and make movies in Hollywood. He’s actually based on one of my friends, but I don’t think he knows it (laughs). But don’t worry; it’s not anything negative. The scenes with Cactus and Cacti are almost like vignettes; they don't really take place in the main story. They’re more like a commercial break, and then we go back to our regularly scheduled programming.

And actually, if you look closely at the Cactus, you’ll see that his look is based on The Rock. If you look at his face with the eyebrows and everything, you’ll notice. There’s this old sketch in my sketchbook, where I have a caricature of the Rock. Then I just made him into a Cactus with tights. So if you look at him, you’ll see that’s where he stems from. I first came up with him back in the nineties, when The Rock was still wrestling Cactus Jack on WWE. He’s like one of the old Hanna-Barbera cartoons that were based off of a famous actor at the time. 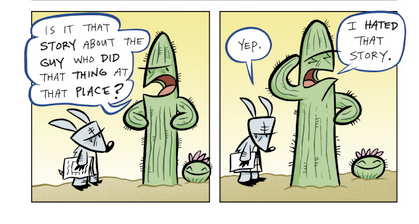 That’s hilarious! Now that you have this expanded canvass to tell your story, are you going to introduce any new characters?

Art: Yeah, there will be more characters. The Tiki monoliths are showing up, but they’re might be more. We just seem to keep evolving their story as we continue to write them.

So you guys have worked together as a team now for years. What’s it like having a consistent and dependable creative partnership like this? How do you keep pushing and inspiring each other?

Franco: Our model is, “If it ain’t broke, don’t fix it.” It’s worked well for years. Art said it best when we were talking the other night. We just have a mutual respect for each other’s creativity. We hardly ever have any arguments. We’ve had dialogues about stuff, maybe sometimes a little heated, but not really. It’s just a creative discussion. It usually comes down to me having an idea, then I bring it to Art, and he has a suggestion, and I go “Oh, I didn’t think of that!” It almost makes it better. It’s fun to write stories that way. It’s been fun and hasn’t stopped being fun, so that’s what why I keep doing it.

Art: It gets to a point where we don’t know who wrote what. When we’re pressed against our deadline, I’ll just go ahead and make stuff up. Later, I’ll forget if I’ve made it on my own or if I made it with Franco. We’re so woven that most times I can’t even remember who came up with what.

Wow, that sounds like a ton of fun. And what’s the difference between working on your creator-owned characters, as opposed to a pre-existing properties like Tiny Titans or Hellboy? How does that shake out differently for you?

Art: They let us treat some of their characters like they’re creator-owned. I’m surprised all the time when they approve of something, especially with The Mask. It’s the character’s 20th anniversary, and when we asked if we could use him, they had to ask Mike Richardson. But when he said yes, I was floored. I didn't think he was going to say yes. It’s like reaching for Superman.

Franco: Not only did he say yes, he said yes to what we wanted to do with the character. We fully expected them to say, “No, you need to do this and follow that.” But they didn’t.

Art: It’s cool, because Itty Bitty Comics was something that evolved within a year and a half. Last year at New York Comic Con, Mike Richardson was just walking the floor, and when we called out to him, he started freaking out and sharing all these ideas and projects. He unloaded all this great stuff on us. Itty Bitty Comics came about two weeks later. We just got an email with a contract on it. Like, here, guys! That’s how it happens. We just talk about it. Thoughts become ideas, and ideas become real. And once it gets on paper, it starts. 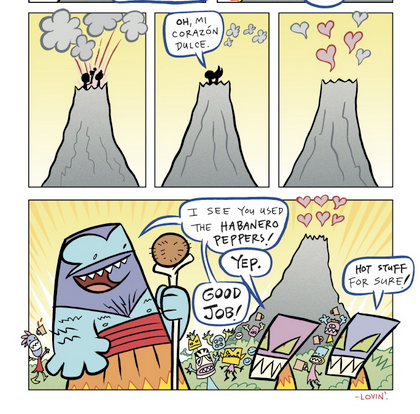 That’s great! Is there anything else you wanted to mention about Grimmiss Island or Itty Bitty Comics?

Art: I think that’s about it. But, we just put out the first trade to Aw Yeah! Comics about a month ago. And the second volume is coming out in January. Hopefully we’ll get to do more of those comics too.

Is Marvel's Wandavision Safe for Kids