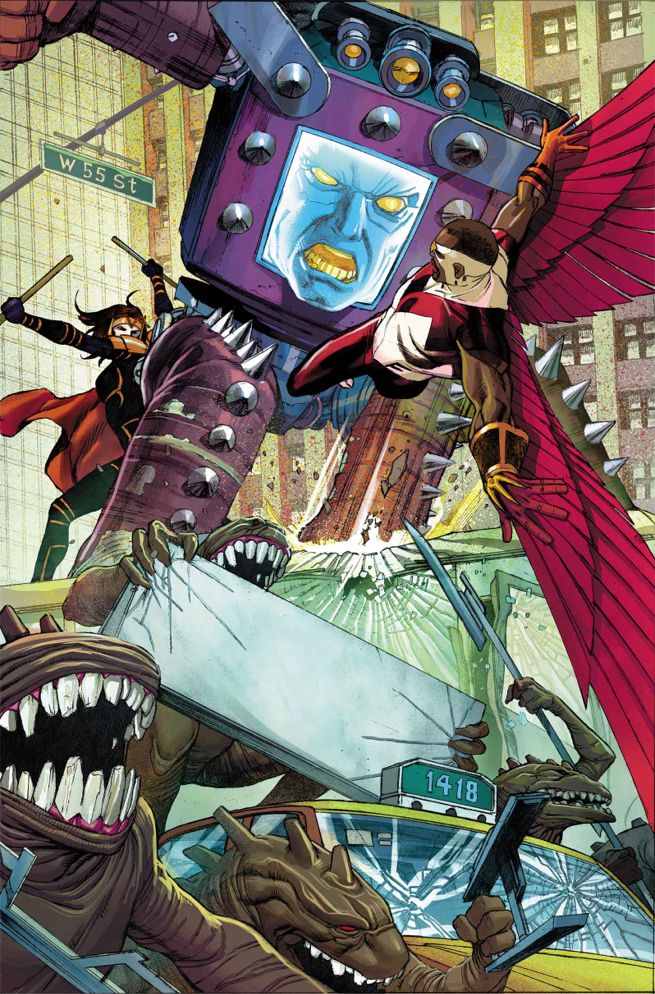 Big changes are in store for the Captain America—and that's saying something, considering that he just lost the Super Soldier Serum that's made him an ever-lasting Olympian. Naturally, this setback could not come at a worse time for the Sentinel of Liberty. The Red Skull and Arnim Zola have return to the fold, and with them, the opening salvos to Marvel's next crossover, Avengers & X-Men: AXIS. While it's still too early to parse the finer details of AXIS (we're only on issue #3 of "Original Sin," after all), we did manage to get Marvel's Executive Editor Tom Brevoort on the phone for a rundown on how the next Captain Americaarc, "The Tomorrow Soldier," will feed into the upcoming event.

You can see more information about the event, as well as some other cover art from tie-in issues) at this link.

There are a couple of things going on. The biggest of which is that at the climax of the previous arc, "The Iron Nail," Steve Rogers' Super Soldier Serum in Steve's body has been neutralized. Going into "The Tomorrow Soldier," he will be a frailer, older, man. He's not infirm, but he's not Captain America. This arc will also herald the return of Arnim Zola and his crazy Mutates. They've reemerged into our world in Central Park, and will be staging a big invasion. This is happening at the worst possible time for Cap. While his spirit is willing, he is not physically up to the task of fighting hundreds of these monsters.

It's interesting you mention that, because at the end of The Iron Nail arc, Steve said that he's not Captain America—the man who wears the mantle is. Now that Cap has been removed from that physical role, can he—and the reader—still think of Steve Rogers as Captain America?

That's what we're going to see over the course of this story arc, leading up to Captain America #25. It's not like Steve is infirm, but he's definitely not spry. Think of it this way: If Bruce Lee had lived to be an 85 year-old man, he'd still be Bruce Lee. But he physically wouldn't be able to do a lot of the things that he could do in his physical prime. He wouldn't be as fast, and he wouldn't have the stamina. Cap still has the knowledge, the experience, and even the muscle memory of all the battles he's fought. He still has the mind of a master tactician and strategist. If he were to face two guys who were larger and stronger than him, he'd probably still be able to hold his own. But that's a lot different from jumping around rooftops and slinging the shield. If he's going to fulfill the duties, he's going to have to find a way to do it in a very different manner.

With Steve in such a precarious state, how exactly will Captain America #24 start the road to AXIS?

We'll see a bit of that even earlier, but Captain America #24 is where we're officially labeling the prelude. Arnim Zola is returning to our world, and as we mentioned back in the beginning of Uncanny Avengers, Zola is the person responsible for the Red Skull's resurrection. He's an old compatriot of the Skull. His return at this point is another piece of the puzzle that is the Red Skull's master strategy, which is what we'll really get into with AXIS. So along with Zola, we'll really see more of the Red Skull in these issues—not necessarily as the prime antagonist, but as a player building towards his own moment.

What's Cap's focus going to be in AXIS proper? Will this arc address what role he will play in the event?

Captain America will be a player in AXIS. It's a big Red Skull story—you kind of have to have Cap in it. What that role will be, that's for the days to come. In the meantime, he has to deal with what's happening in The Tomorrow Soldier storyline, which will lead us towards AXIS.

Will Uncanny Avengers—another title leading into AXIS—reflect what's going on in Captain America and "The Tomorrow Soldier" storyline?

Yes. Once we are finished with "Avenge the Earth," Uncanny Avengers will essentially catch up with the rest of the Marvel Universe. We will jump ahead and be able to recalibrate to where the rest of the characters are. One of those things will be what happened to Steve in his own title. Another will be what's transpired with Wolverine [and the loss of his healing factor] in his title. Uncanny Avengers #23 will put the title back into synch with everyone else.

Why is "The Tomorrow Soldier" the right time to bring the Red Skull back into the main fold of the Marvel Universe? Has he been keeping tabs on Captain America since his return from Dimension Z?

The Skull has been putting his plans into place going back to Uncanny Avengers' beginning. We saw him in Captain America a few months ago, when he tried to provide sanctuary for Zola's daughter, Jet Black. He's been on the canvass, and has been aware of what is going on. He also has Professor X's mental abilities now, so there isn't a whole lot that he doesn't know about, assuming he wants to know about it. He will certainly know what's going on with Steve by the time the "March to AXIS" issues hit.

Where will Captain America's spirits be in the "Tomorrow Soldier" arc? After everything he's been through since Dimension Z, losing his physical abilities certainly can't help the coping process.

Steve is still going to be coping with a lot of baggage. He's going to be coming to grips with his current limitations, and how he can overcome them. The reappearance of Arnim Zola is going to take all of those Dimension Z experiences and makes them fresh again. To some degree, this is going to dredge up the deaths of Ian and Sharon, and the entire Dimension Z experience. That said, at the end of "The Iron Nail," Cap started finding his second wind. He realized that he'd been moping around and was not at his best. So, he was able to pull it together to some degree and stop The Iron Nail. He's carrying even more baggage now, but at least at that moment, it seemed like he was turning a corner and regaining his fighting spirit.

Speaking of Arnim Zola, how will his return affect Jet Black, who's become an increasingly important cast member to Captain America?

It's going to have a pretty immediate effect on her. It's as much of a thing for her as it is for Steve; maybe even more so, because of her familial connections.

What role will she play as Captain America gets closer to AXIS?

You're going to have to wait and see on some of that (laughs). I can't say right now.

Fair Enough. Anything else you wanted to mention about Captain America "The Tomorrow Soldier" story arc?

Just that Carlos Pacheco is back on art duties for Captain America. He's doing some great work, and is really getting into it. These issues are a beautiful art job, and people will no doubt enjoy it.

Exclusive: Brevoort Talks Captain America Vs. The Red Skull On The March To Axis