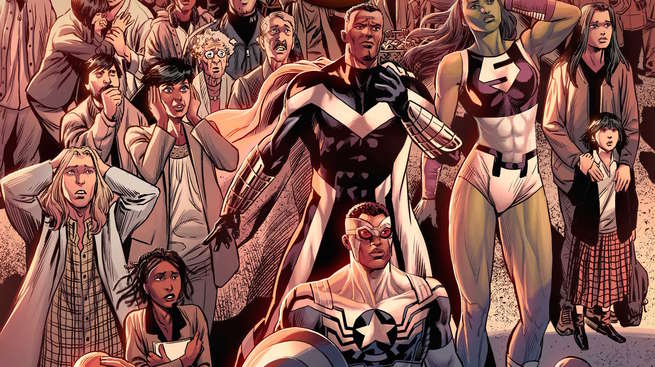 Marvel's recent announcement of their Secret Wars event lit the Internet on fire, especially with talks about rebooting the universe altogether. Marvel's secrecy around Secret Wars is thicker than the Vault, but more information is slowly coming through, we're getting not just an idea of what is happening, but how it is affecting these characters. Captain America and the Mighty Avengers "Last Days" tells the story of the last days on Earth with the Avengers for the People and how they are facing oblivion.

We talked to series writer Al Ewing about the two-part story and the direction he took with it and why he still thinks the Mighty Avengers really are the "Avengers for the People", as well as his fantasy roster for his dream Avengers.

So Al you have the Mighty Avengers facing their "last days" here as the title implies, but they're not facing it completely alone are they?

Well, in one sense they are - there's nobody who gets a starring role in the "Last Days" issues who's not a Mighty Avenger. But that means more than just superheroes - it's the ordinary people who man the phones, volunteer their time in other ways, or just stand up for their fellow human beings when they're in need. That's all it takes to be a member of the Mighty Avengers, so in a real sense it's the biggest team of heroes in the Marvel Universe.

Now is this just an Avengers story in the way of superheroics, or is this showing more of the human side of things?

We'll be seeing both sides - the Last Days issues will be about people helping where they can at the end of the world. Some of those will be superbeings with awesome powers, and some are just people. If the current plan comes together, we'll be going from Time Runs Out right up to the final seconds of life on Earth... as seen through the eyes of the most unexpected Mighty Avenger of all - you! The person reading this! That's going to be a wee bit tricky, mind.

Sam hasn't been the field leader but for a couple of months, do you think he's ready to take on something like this?

He's not strictly the field leader now - although he's a smart, battle-sharpened strategist who knows when to call the plays as well as follow them. But yeah, he's more than ready. He's Captain America. Captain Americais the top super hero job, at least in the USA - the ultimate responsibility. You don't get to cook in that kitchen if you can't stand the heat.

Now Secret Wars is one of the biggest things, if not the biggest event since the debut of the Fantastic Four in the Marvel Universe, do you find such a project tie-in to be daunting, or another reason to flex your creative muscles and bring your A-game to the party?

It's always a bit of both when you hear about a new crossover - daunting in that you've got to think of a way to make the event serve you as well as vice versa, but also very exciting. The email comes through and immediately the wheels start spinning - I want in, but how do I handle this? What's the best way in, what approach is going to work for us and for the book? And this time, the crossover is the end of everything, so all of that gets intensified. Luckily, I've had quite a while now to think about it, and - fingers crossed - I've a feeling we'll deliver something a bit special.

Tell us about the team dynamic going into Secret Wars, right after the events of AXIS. This team was billed as the Avengers for the people, do you think that still holds up for Last Days?

If anything, Last Days is going to be the return to that. Over the next few issues leading up to it, Cap and the Mighty Avengers are going to be getting into some very high-end cosmic stuff, so Last Days will be a welcome reminder of where the team came from... just before we say goodbye to their whole universe.

Is that still weird to say "goodbye" to the Marvel Universe as we know it? But it's not really a goodbye as it is a see you later, right?

You might think so - I couldn't possibly comment. Sticking to the immediate term - yeah, it's a little strange to be on board at Marvel for the end of the Marvel Universe. There have been "THE END" stories before, and I suppose part of me is always wondering what I'd do if I was given the brief of "this is the final story of so-and-so"... well, now that moment is here! In the present day! And it turns out this is the story I'd do.

Was there a character in your roster you wished you had more time to explore?

Well, I'm just getting in under the wire with some Monica stuff that's been waiting a long while. Out of all of them, I think everyone's had a moment or two or is about to get one. Doing a little more with Vic and Ava would be nice, although they're getting some moments in the current storyline - I'd really like to sell those two as a crime-busting duo in the Power Man/Iron Fist vein. It feels like a natural legacy story.

Given the chance to do something different (which could be coming), what would you plan to do this time around?

I'm not sure I'd do anything different, exactly - I feel like second-guessing myself in that way could make the current issues seem less worthwhile for the reader, you know? So everything is perfect, true believer! My only flaw is that I have no flaws!

But seriously - I suppose we had an opportunity to visit the Microverse, and that's always fun. It might have been nice to get one last trip around the Microverse in before everything dies horribly.

Lastly, do you have a "dream" Super Team roster you wish you could write? Like, take seven or eight characters for your roster. Who would you pick?
ROM, Acroyear, Doctor Who, Zoidzilla, Pinsor, Indiana Jones, Bill S Preston Esquire and Ren Hoek. 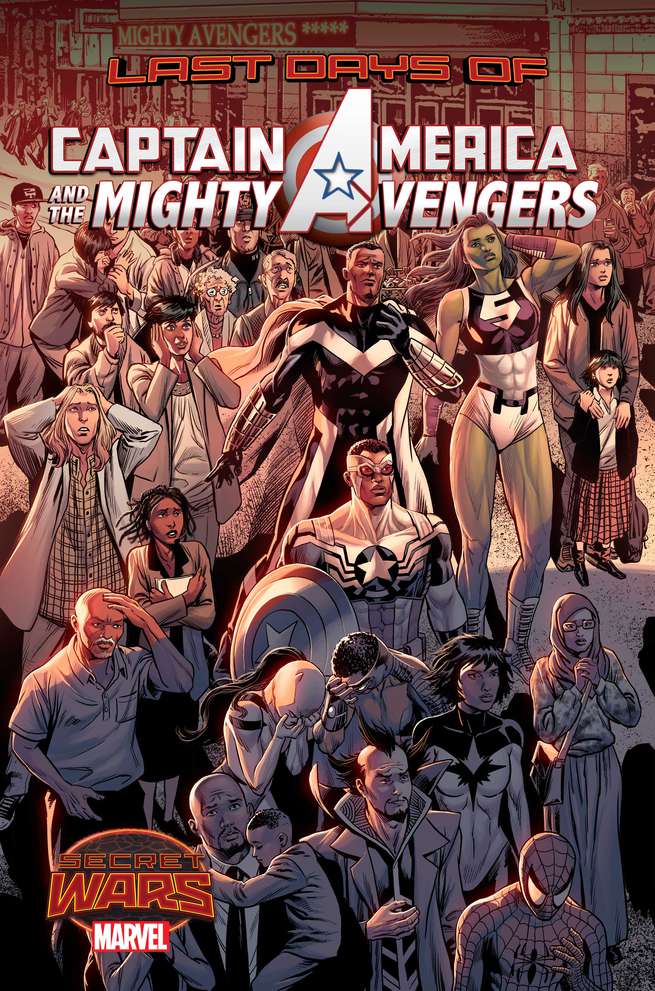 Captain America & The Mighty Avengers enter their "Last Days" this May on the Marvel Comics App and Comic Shops worldwide.