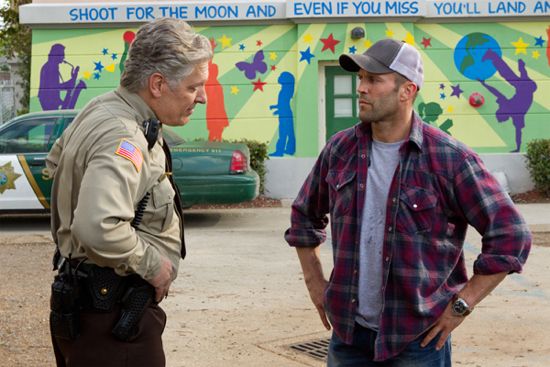 In Homefront, Clancy Brown plays Keith Rodrigue, a small town sheriff who finds himself caught between a battle between an ex-DEA agent and a psychotic local drug lord. Homefront is scheduled to be released on Blu-ray™ Combo Pack including Blu-ray™, DVD, & DIGITAL HD with UltraViolet™ and On Demand on March 11, 2014.

As part of promoting the home video release of Homefont, Clancy Brown talked exclusively with Comicbook.com about Homefront and a number of his other past and present projects.

Comicbook.com: Can you tell us what led you to take the part of the sheriff in Homefront?

Clancy Brown: Well, I got a call from Gary Fleder, who said he was shooting this little movie down in Louisiana, and would I like to come down and play this part. And he sent me the script, and I read it. And I thought it was a very unexpectedly good little human drama going on in Jason Statham/Sly Stallone movie. I thought a lot of expectations would be tricked with Jason having a daughter, and I don’t end up being a good guy or a bad guy. I’m just a guy, and that’s always fun to play.

Comicbook.com: Yes, I thought that was one of the most interesting things about the movie, how your character, and some of the other characters as well were between good and evil. Why do you think your character ultimately made the choices he did in the film?

Clancy Brown: Well, it’s one of the things I liked about the script. It really wasn’t your typical sort of movie where our hero just sort of wants to be left alone, and then the bad guys come and mess him up, and he can’t do anything else but kill everybody. It wasn’t like that. I was really one of these sort of things where you had a nice little town that had an equilibrium, then something happens in a classroom, and people overreact, and one thing leads to another. And the next thing you know, the two people that should never be in the same room together are at each other’s throats, you know, Gator and Broker. And the rest, [Sheriff] Rodrique is trying to restore that equilibrium, and I thought Kate’s character was great, and she did a bang up job with it. She’s just trying to protect her son, and then realizes that maybe she took it too far. She pays for it. I thought it was a really well-constructed script with a lot of unexpected but very human and very understandable turns in it. I thought it was really a cut above.

Comicbook.com: We spoke with Gary Fleder earlier today, and he had very high praise for your work in the film. What was it like working with him on the film?

Clancy Brown: Gary is a terrific guy. Since the last time I’ve worked with him, he’s had a child and everything, so a lot of these things are hitting closer to home for him. And I think he’s feeling them, and I think it’s made him a better director. He was a pretty great director before. This has certainly taken him to the next level emotionally in a human sense. He’s always had command of the technology of filmmaking and the stories, but now I think he’s a little more invested personally in some of these things he does. Now, that he’s joined the ranks of parenthood. It’ always fun working with Gary. He gives good, concise direction, and he has great command of the story. He knows what he wants to do, and he knows what he has to do, and he balances both of those very well. He’s just a solid, solid director. I would work with him again.

Comicbook.com: You’ve voiced an astonishing number of comic book characters in animated movies and TV series. What has led you to take on so many comic book roles? Are you a big comic book fan?

Clancy Brown: Well, those are really the ones that are offered to me mostly. I got into voiceover because I had a child, and I wanted to stay closer to home, and most of those voice jobs are done here in LA. So it’s not a very good story, but I just kind of wanted to see my little girl grow up, so I started in on the voiceover part of acting and really enjoyed it. And those are the roles I end up getting.

Yeah, I love comic books. Who doesn’t? What red-blooded American boy doesn’t? They tell you that you get to play Lex Luthor you’re not going to say “No.” You’re going to say “Yes” with Odin or Red Hulk or any of those other comic book characters that I’ve played.

Comicbook.com: Speaking of Lex Luthor, what’s your opinion on the casting for Batman Vs. Superman?

Clancy Brown: Jesse Eisenberg as Luthor is awesome. I think it’s an inspired choice. I think he’s just going to knock it out of the park. He’s kind of perfect in so many ways for this day and age and that character. I don’t think there’s going to be any question he’s going to rock with it.

Comicbook.com: Of course, you were recently cast in Warcraft can you tell us a little bit about your character in that or when you start filming for that?

Clancy Brown: If I told you anything, I’d have to kill you. They’re not letting me talk about it. It is filming right now. I can confirm who is in the cast and that’s about all I’m really allowed to say. But it is a great story. It is a real good story. It’s not just a gameplayer playing the game. It’s deeper than that. It’s a real good, relatable story.

Comicbook.com: Are you allowed to say how broad or small your role is? Are you involved in the majority of filming for it?

Clancy Brown: Well, we’re all involved in the majority of filming. It’s a big, long shoot, and all the people that are in the cast are there for the duration. There’s no small parts in it really.

Comicbook.com: Are there any other upcoming roles you have in comic book animation or live action movies?

Clancy Brown: Well, there’s Sparks. Sparks is being released. I think it’s got a limited theatrical run. It’s got a DVD release, which is a real low budget kind of anti-big budget, anti-Marvel, anti-DC movie. Not that it’s against it, but it’s just balancing it out. It’s a real good, little yarn, and a real good spin on superheroes and their psychology and whatnot.

Comicbook.com: What were the actors and actresses that you were most excited to work with on Homefront?

Clancy Brown: They were all set, so I was very happy to hear who the cast was. Jason has worked with a couple of my friends, and I’ve always enjoyed Jason and thought this would be a great challenge for him. Not a challenge that he couldn’t meet. He knocked it out of the park. But a nice change for him.

Omar Benson Miller I’ve worked with before and love that guy. He’s great to hang out with. And Kate Bosworth I did not know, but she was terrific. I thought she did great in her role, one of the best things about the movie.

Rachelle [Levefre], I think I worked with Rachelle before, but I don’t know. Franco I got along with famously, and I ended up doing a little cameo for him in a movie he directed. He always does these movies and asks people to do them for free, so I was happy to do that for him. Izabela [Vidovic], I’d never met before, and she was a lot of fun, the child actress. Marcus [Hester],  I thought was terrific, especially with Kate. Marcus played Jimmy Klum, Kate’s character’s boyfriend. Winona [Ryder], I didn’t deal with her too much, but she’s a kick in the head. She’s quite a character, and I thought she did wonderful in it as well. But most of my scenes were with Jason Statham, and you can’t ask for much better than that.

Comicbook.com: Would you come back for a sequel if they decided to do a second film?

Clancy Brown: Yeah, because it’s a book series. Yeah, sure, I’d love to do that. I really enjoyed Jason and Gary and all those guys. So if they wanted to turn this into a series of movies, I’d happily do that. We had a good time.

Comicbook.com: You were also in Star Wars: Clone Wars. Are there any other Star Wars projects in your future?

Clancy Brown: Nothing I know of. Yeah, I would love that though. I made that movie, man. That came out right when I was eighteen years old. I take credit for the success of the Star Wars franchise. That was my generation. We made it.

Comicbook.com: What else would you like to tell us about Homefront or any of your other projects?

Clancy Brown: I’m not very good at asking myself questions. Did you like the movie?

Clancy Brown: I think that’s a good observation, and that’s sort of what I enjoyed about it. It sort of played with people’s pre-conceptions and turned a different way and took different paths. I think that’s why it’s worthwhile. I think it’s a really good movie for that reason.