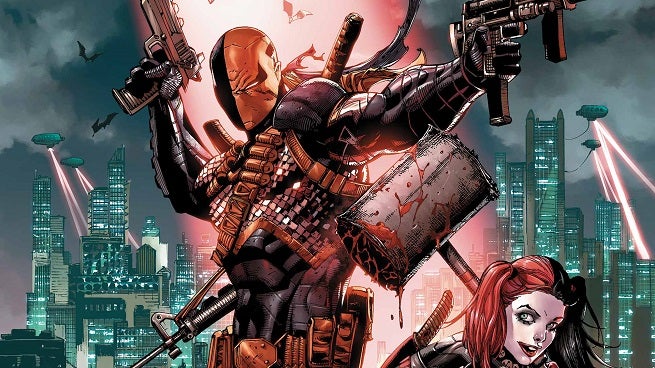 DC Comics has provided ComicBook.com with an exclusive preview of Tony S. Daniel and Sandu Floreau's Deathstroke #4, which is in stores on Wednesday.

In the issue, Slade's journey into his past takes an unexpected turn, leading him to Gotham City – and Harley Quinn.

You can check out the preview pages below, and Daniel shared a few thoughts on the issue with us.

Obviously this recent relaunch has been pretty well-received. What do you think is the key to making Deathstroke a readable, relatable character?

Honestly, Deathstroke is just a kick ass character. I think just unleashing all that he can be in a comic series is the most important aspect of a successful run. I'm only starting with him at this point. But from jump street I try to take him down a few pegs, make him more vulnerable than we've seen before.

Seeing the mighty fall is always going to spark people's interest. Now for the once-mighty to regain their glory, that's something we can all get behind. It's just that I'm doing it with a character that is known mainly as a 'bad guy.' I put an emphasis on Slade Wilson, the man, when I started this series. All the cool action scenes, gun battles, sword fights, all of that can be cool as hell, and that's what I want to deliver of course. But it's the character and whether or not you can relate to him, even like him, is what's going to make this an interesting journey.

I want to make you, the readers, care what happens to Deathstroke. It's simple logic, but executing it is another thing entirely. And that's it. Execution of the character, his life, his family, his problems, the story engine of this series. The art comes second to that for me but I'm trying to keep the balance where both the story and art are appealing for Deathstroke fans.

You haven't had a book on the stands since the character Deathstroke was off Arrow, but he'll be back on the show sometime between when #4 and #5 of the comic book series hits shelves, I think. Do you think your past work with Batman has prepared you for being under the microscope of a character with non-comics-reading fans from other media?

Batman was a whirlwind for me. A fun and laborious one, and one I'd certainly do again. I think I handle being under the microscope much better as a result. When you're on Batman, everyone has an opinion on how they envision their favorite hero. He's an icon and comes with such history.

So there's a framework you have to work within, because no matter what, Batman is bigger than you, the writer or artist. And that's fun and amazing and a dream, a holy grail, for most writers and artists. But there's also fun when you can take a character like Deathstroke and just reshape him and mold him into something that hopefully turns out to realize his full potential. It's going to take some time though. There's a lot of building up for him and a lot to establish in the coming story arcs.

As far as other media, Deathstroke being more recognizable really helps us in the long term. His video game appearances and action figures are also huge. There's a large contingent of fans who want to see more of Deathstroke. I'm glad I'm helping make that happen with his new series.

What would people need to know in order to pick up this issue, know what's happening at the start, and finish reading happy?

Well issue 4 shows Deathstroke learning more about the people who are interested in helping him find his son, Jericho. He learns a bit more about the people who hired him to kill his father, who now is using the League of Assassins to help him utilize his own unique powers. Deathstroke learns his son is in Gotham City and is on the next flight out. He needs Harley Quinn's help but she'd prefer to kill Deathstroke rather than forgive him for betraying Suicide Squad a little while back.

I can't spoil too much more, but the ending really should get people excited for what's to come.