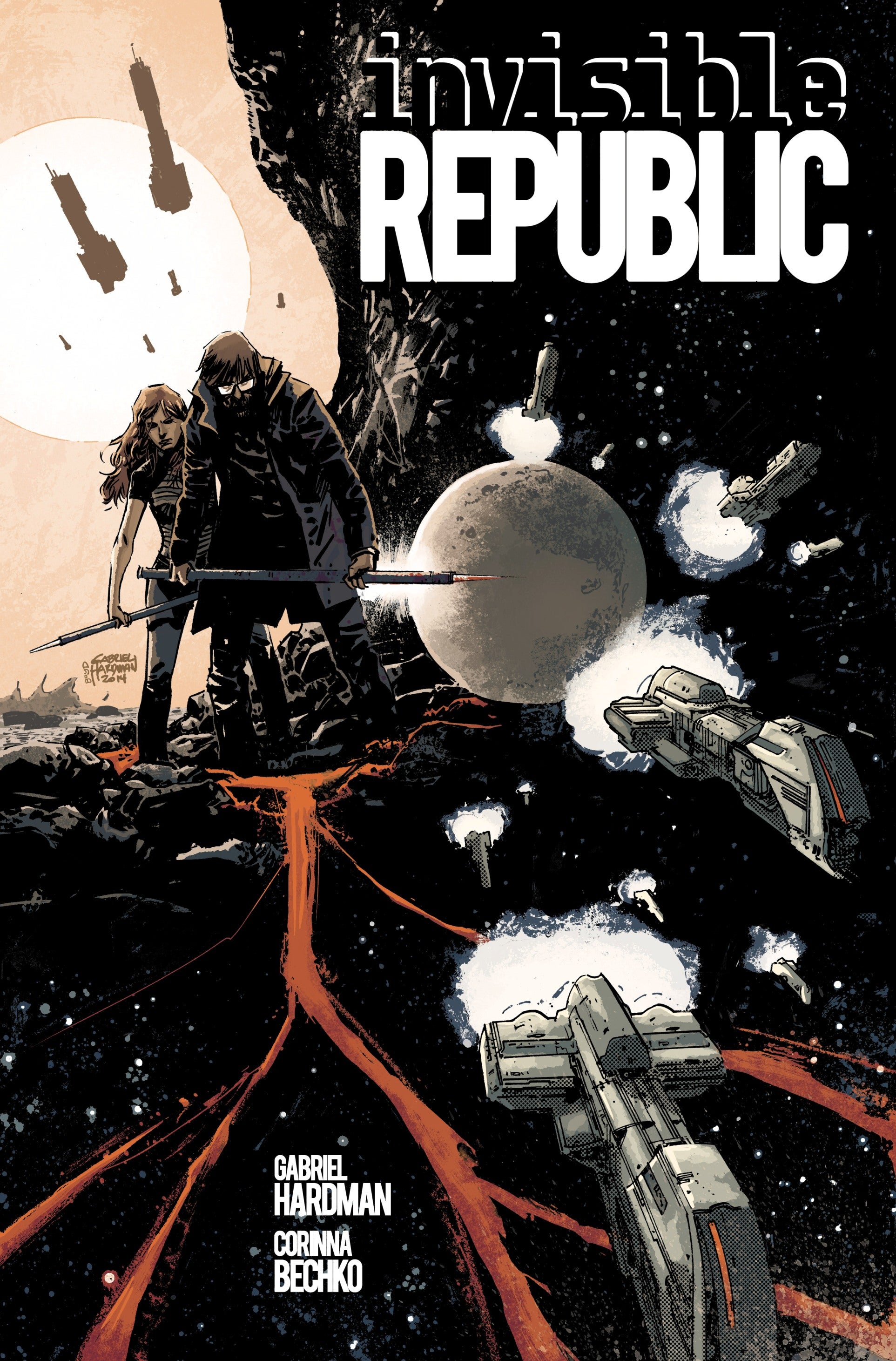 A gritty sci-fi adventure story, Invisible Republic centers on reporter Croger Babb, who uncovers the four-decade-old journal of Maia Reveron, detailing what she knows about the legendary Arthur McBride, while covering a humanitarian crisis. Maia has been erased from all the official histories, but she alone knows what Arthur is really capable of.

Hardman and Bechko joined ComicBook.com to exclusively discuss the upcoming series, which will launch in November 2014.

First of all, why Image?

Corinna Bechko: It’s impossible to overstate how important that can be to some projects. It allows us, in a sci-fi context, to explore themes of power, privilege, and the way a small act by common people can have far-reaching consequences.

Hardman: INVISIBLE REPUBLIC is a dream project of sorts for us. It’s a book we’ve been planning for years and Image seems like the right place for it.

Is there any connection to the Greil Marcus/Bob Dylan book (of the same title)?

Hardman: INVISIBLE REPUBLIC is sci-fi secret history. It’s the story behind the story. The rise of charismatic leader Arthur McBride, from the POV of the one person who knew him best. It does relate to the Greil Marcus book in theme. But even more than Dylan or The Basement Tapes, Marcus’ music essay book is about the folk tradition – the way stories evolve over time, pieces of them being appropriated and woven into a new context in new eras. That’s definitely something we’re setting out to do here.

Bechko: But the name also works literally with our story. This is about uncovering the secret history of a revolution -- very much the story of the “invisible” republic. The way things really happened just out of view of the public.

While you refer to Arthur McBride as "legendary," your actual heroine is removed from the history books. Is that an intentional parallel or just a necessity of the plot?

Bechko: It’s quite intentional, as will become clear as the story evolves. We all know that history is written by the winners, but it is often made by those who later have no voice. Just think of how the women of Genghis Khan’s era were almost lost to the mists of time. Only careful research has revealed how much power they actually held, and how instrumental they were in holding the empire together.

And, again -- did you get the name Arthur McBride from the traditional folk song? (Dylan covered that, too. If there's a Mr. Jones in this, I call shenanigans!)

Hardman: The connection goes farther back than Bob Dylan. One of our main characters shares the name “Arthur McBride” with the rebellious 17th Century Irish ballad – it’s essentially an anti-recruiting song -- and the incident in the ballad also serves as the spark to our story. But the context is totally different. Also, it’s not a reference anyone needs to understand to enjoy the comic. We’re just using the folk tradition of incorporating old elements into a new story and moving beyond it.

You guys have both done Star Wars in the past. When you describe something as "sci-fi adventure," do you think those familiar with your work will make that intuitive leap?

Hardman: With INVISIBLE REPUBLIC we’re definitely following through with the kind of humanist, epic storytelling that we’ve done in our PLANET OF THE APES and STAR WARS books, but this is a more adult story. There is the freedom for us to be explicit when need be, and there are no restrictions on where this story can go. That said, we had few restrictions on those licensed, freelance books. We were very conscious of delivering books that fit into those worlds but we were also free to tell stories we thought were worth telling with a lot of support from both the licensors and editorial. I think we got away with a lot while still staying true to those established worlds. I’m very happy with those books.

Bechko: I hope that people who enjoy big, epic, sci-fi stories in established universes will come along for the ride in this new one. We enjoy telling stories that exploit the richness that can be gained from invented worlds, and here for the first time we are creating one from whole cloth. I think if folks enjoy what we’ve done in the past they are likely to find INVISIBLE REPUBLIC worth checking out.

I feel like "adventure" rather than "action" in today's marketplace kind of implies a less intense/gruesome/whatever philosophy. But you point out that because it's a non-corporate story, anything can happen and anyone can die. Am I misreading the current meaning of an adventure story?

Hardman: Our book has action, adventure, death, sex, honor, psychopaths, loyalty, deception and much more set in a sci-fi world. But it’s not fantasy like Star Wars or speculative like Kubrick’s 2001, it’s a gritty sci-fi adventure story.

Bechko: What we really love is what we like to call “poli-sci-fi”, as anyone who has read our APES books knows. This is an adventure book in the sense that it is full of heroism and cruelty, battles and discoveries, but I don’t imagine it’s an adventure story in the way that you imply. By saying “adventure” we are conjuring more Alexandre Dumas than all-ages whimsy.

Do you think that the modern, Internet-driven culture makes it easier or harder to "disappear" someone with whom you disagree?

Bechko: There are always ways of making someone disappear. Sometimes all it takes is bullying them into silence.

Hardman: INVISIBLE REPUBLIC is set in a fairly realistic sci-fi world in a future where distant multi-generational colonies have sprung up far from the reach or over-site of Earth. The bulk of the story takes place before faster-than-light travel, so these colonies have no one but themselves to rely on. This insular quality breeds corruption and a certain amount of backwardness. It also brings retrograde technical capabilities since they’re not being resupplied by Earth. They don’t have the interconnected world we know now. For them, there are still secrets.

Easier or harder to get Truth out there?

Bechko: The truth is a slippery thing. Anyone reporting a news story has to make choices, and sometimes those choices ignore context in favor of fact. In INVISIBLE REPUBLIC, we’re dealing with a first-person account, but we’re also dealing with how that account is transcribed for the “official” record. Will the truth win out? Can it ever?

Gabriel, you've been around for a while. How does it feel to be at that point in your career where you've got Stephenson saying "one of the great talents of the last few years?

Hardman: Obviously it’s very flattering and much appreciated. I’ve really only been making comics for the last five years after a long time exclusively working as an illustrator/storyboard artist on films like INCEPTION, TROPIC THUNDER and X2. I think every bit of the freelance comics work has been ramping up to do exactly this kind of creator owned work. It’s really exciting! 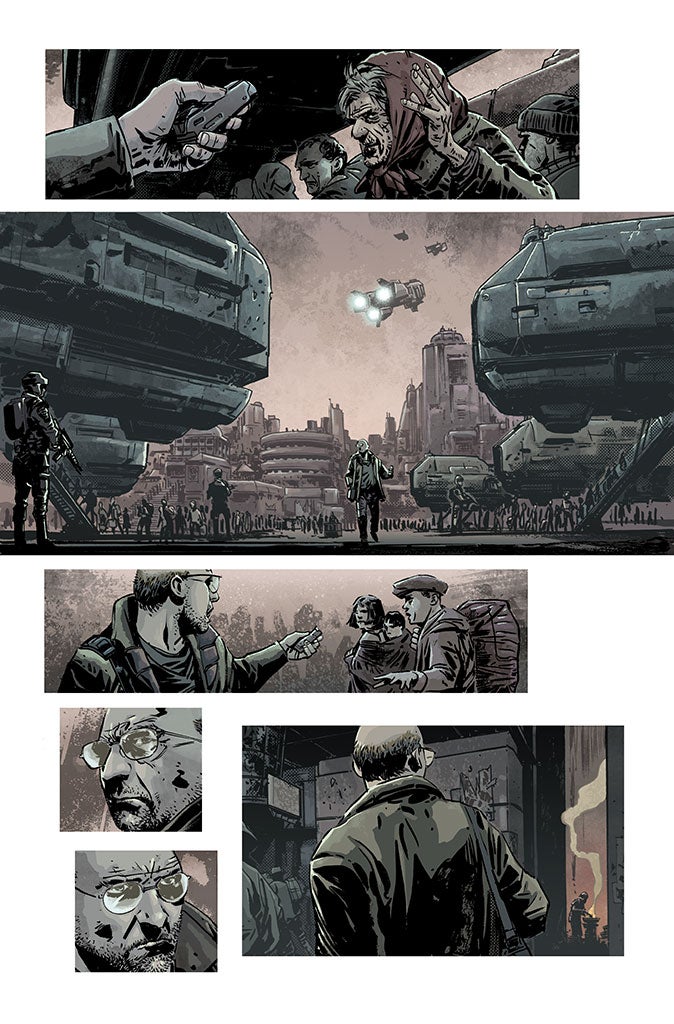 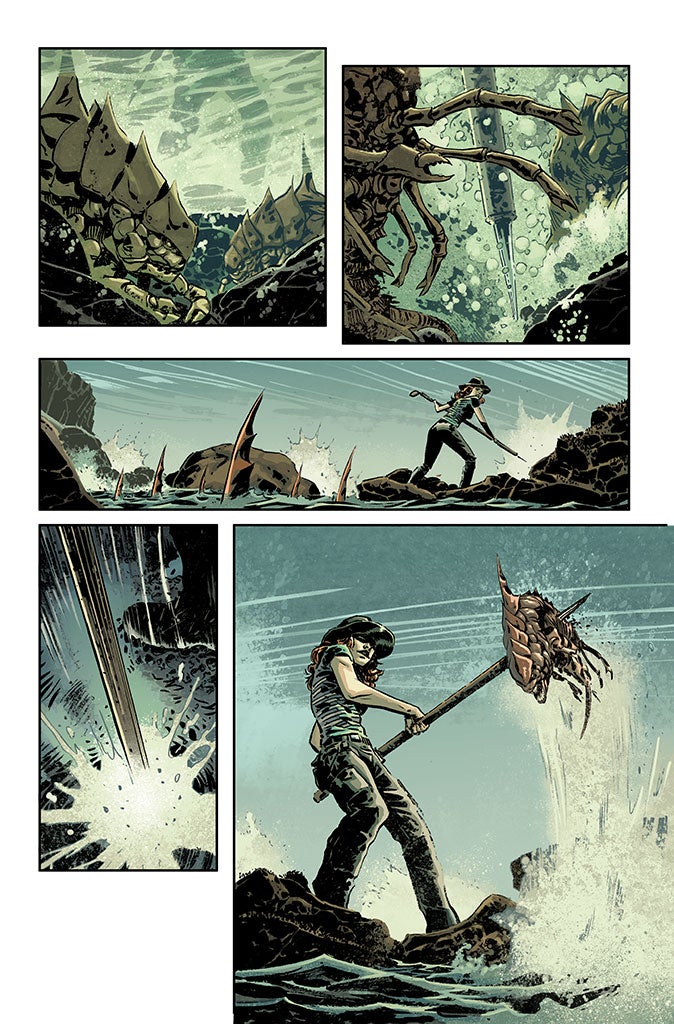 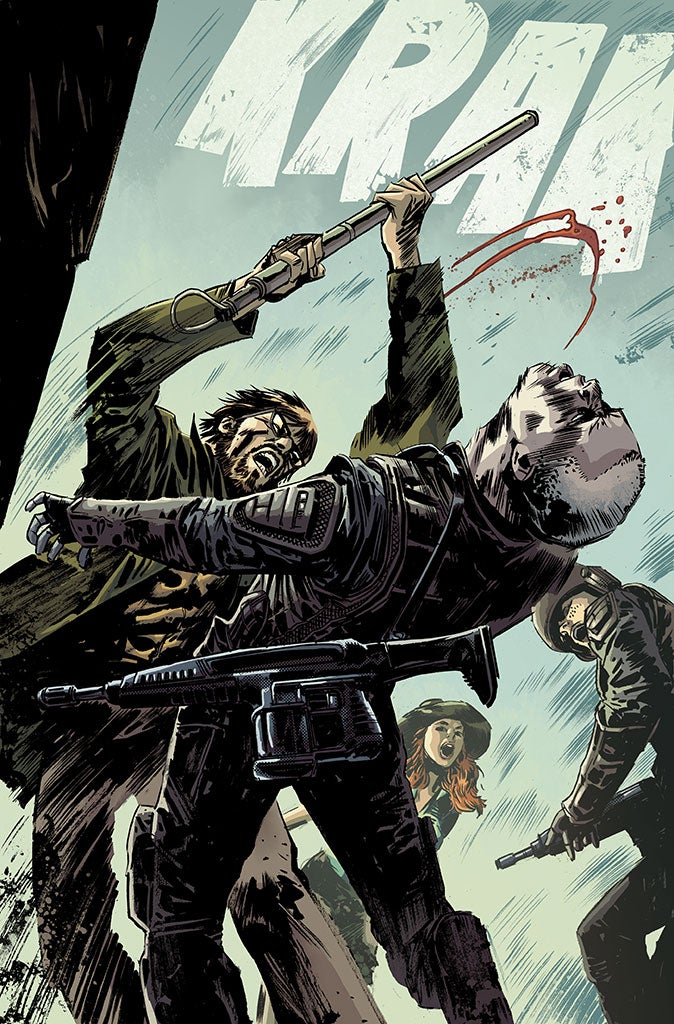