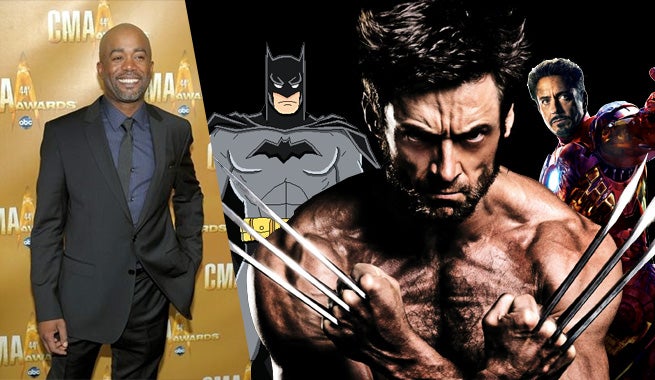 It's no secret that country music star Darius Rucker is a huge comic book and geek culture fan. He has lent his voice for the Scooby Doo! And Kiss: Rock And Roll Mystery, owns a massive collection of comics, and has even been caught wearing a ComicBook.com T-Shirt!

ComicBook.com recently caught up with Rucker to talk all things geek, and learned that he may even be a bigger fan of comic books and superheroes than the most devout Comic-Con attendees.

Rucker told us that he generally devours "50 or 60 titles a month," before admitting that his summer tour has put him about six weeks behind current comic events. "I read all the Spider-Man titles, all the Batman comics, all the Superman comics, all the Justice League comics, all the X-Men books, all the Avengers, Captain America, Thor...anything and everything that's got Wolverine in it. And I read all the Star Wars books," Rucker revealed. That's no joke. He buys a lot of comics. "I used to go in every other week before I got so busy here, I've fallen back a bit on my reading, but yeah, I go in, geek out, we have a good time."

But the life of a musician must be tough when it comes to keeping up with the comics and their movie adaptations. In fact, Rucker didn't even know that Superman killed General Zod until a month after Man of Steel's release. "I got mad at [my friends] because they didn't tell me about Superman killing Zod at the end of [Man of Steel]! I was like, 'I can't believe you didn't tell me Superman kills someone!' I was angry!"

Rucker, like many viewers, was surprised about the Man of Steel's choice. "It shocked me! As a comic book fan, it just shocked me! He just killed somebody!" Looking at the DC Cinematic Universe's future, Rucker won't pick a winner out of Batman and Superman's March 2016 showdown, but insists it's all set-up for the Justice League films. But, if the two were to settle their dispute via brawling and a victor were to be crowned "Batman would win," Rucker says. "You know he's got some kryptonite somewhere."

Not only does the musician have faith in Batman's ability to pummel Superman, but he also believes in the man behind the mask, actor Ben Affleck, saying, "I'm an Affleck fan. I dig him. I think he's a great actor and great director. I was surprised because I thought [Warner Bros.] would go with somebody not so famous." Like many fans, he believes Christian Bale's Batman was fantastic, but has full trust in Affleck to knock the role out of Gotham. "I think it's gonna be great. I'm gonna leave judgment until I see it, but I think it's gonna be great."

When he thinks about that other big upcoming superhero battle between Captain America and Iron Man in Captain America: Civil War, Rucker glows with excitement. A big fan of the original Marvel Comics series, he is very much looking forward to the big screen adaptation. "That was such a great moment for Marvel. It was so well thought-out and so well written," he explained. "You know, I'm never on the side of registering anybody. That's just the way I think America should be." So, when it comes down it, "I'm on Captain's side," Rucker says of his Civil War alliance.

"When I heard that Robert Downey Jr. was going to be Tony Stark, I was so angry," Rucker admitted, thinking back to Marvel Studios' earliest days. But that opinion changed when Iron Man hit theaters in 2008, and it changed quickly. "The first time I saw him on the screen, I said to myself, 'No one else could ever play this role.' He was so perfect."

Then, there's his unmatched love for Wolverine. With Hugh Jackman's final bout as the clawed mutant nearing, Rucker has thought about the third solo Wolverine film quite a bit. "I would love to see Old Man Logan. There's so many great stories to tell. I'd love for them to do those flashback films to when he was with Sabretooth, or in the war, or the army, or one of those stories. There's so much stuff they can do with Wolverine," he explained. Thinking ahead, about when Hugh Jackman sheaths the claws for good, Rucker agrees with ComicBook.com's call for Scott Eastwood to take on the role. Rucker, who has done a been of voice work for animated shows in the past, says, "I would lose my mind," if offered the opportunity to voice Logan.

With the chance to talk to a fan of comics as big as Rucker, it would be shame not to find out his favorite comic book movie of all time. "I want to say it's the second X-Men movie because that's when I was totally blown away by how they perfectly got the comic book fighting." But after further thought, Rucker ultimately made another call. "I would have to say the Avengers," he reluctantly admitted. He was little less satisfied with its sequel, Age of Ultron, saying, "turning Tony Stark into the creator of Ultron, and not Hank Pym, was just too much for me, as a reader."

Rucker will have a tough time catching up on his comics. He's still on tour at the moment, heading to Columbus, Ohio this weekend and around the country until late November. He'll finally be able to relax after Thanksgiving, supporting his beloved South Carolina Gamecocks as they take on the Clemson Tigers in the Palmetto Bowl. "I will not miss the Clemson game!" he exclaims. "I will be there!"

Do you agree with Rucker's comic book opinions? Do you share his tastes? Let us know in the comments!