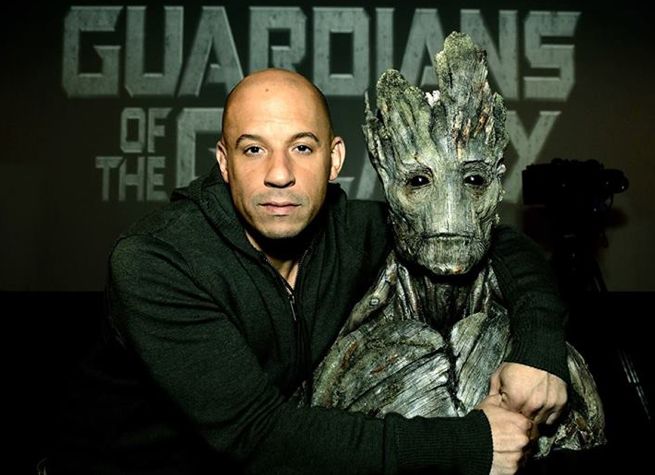 Vin Diesel may not have much to say in Guardians of the Galaxy, with his role as the space-tree Groot limited, more or less, to groans, grunts and "I am Groot" in myriad inflections, but he sure can speak in real life. When I sat down with Diesel to discuss the film last week, I only managed to get in a few questions. Mostly, Diesel was able to take care of business himself.

So here's what Diesel had to say about his role in the film, about the changing role of social media in the movie industry and, best of all, his very sincere sense of responsibility to his fans. We started by talking about Diesel's very open and honest Facebook page where, right from his first meeting with Marvel, he made sure his fans knew about it.

Vin Diesel: Marvel have been, typically, very reserved and they like to control what information comes out but we're all adjusting to the social media phenomenon. When my Facebook page started only Barack Obama had a million fans and the idea that I passed the first black president was so surreal and ever would I have imagined getting to eight million or ten million. It's a new phenomena and I talk about it with everyone, including Marvel on that day I went to visit them. They weren't aware of what was going on, of the frenzy.

I was forthcoming about my meeting with Marvel and they weren't used to it. I wasn't used to anyone trying to censor what I say to my Facebook fans which, despite the numbers, is always something special to me. I feel like I have to be truthful because the fans are truthful to me. All of the great decisions I have made in the last five years have come from carefully sifting through the feedback, listening to the audience, their perspective. I had been offered Marvel roles before, and I never needed to do that until it became important to the people who are important to me - the fanbase. Do they expect me to do something else after Groot? It's tricky. I feel like people expect me to give them the Hannibal trilogy. I feel like that's the most outstanding thing.

When I woke up on my birthday I thought, "Okay, I'm this old and I have not delivered Hannibal. I have failed." Here's some cake for the big failure. I take a lot of pride in keeping my promises, no matter how outrageous they are. Getting a rated R Riddick was a promise and that was a very serious request from the social media, from the fanbase that I respect and rely on so much, that I cherish. Bringing back a dead character in The Fast and Furious was another promise. The third promise was the Barca trilogy.

Each success, each year, I get closer and closer to it, and every time I go back to do a film like Fast, I will try to leverage something from the studio. When they wanted me to do Fast and Furious 7 in record breaking time, asking me to sign off on it before that was a script - there was no script and we were releasing Fast and Furious 6, they needed me to tell the exhibitors we'd give them a Fast and Furious 7 - all I could do except say "No way, I'm not going to do it," was to leverage something in terms of Hannibal. They guaranteed to distribute all three Hannibal movies, so things are moving forward there.

When I first got the call from Kevin Feige, he prefaced the call by saying "This is the strangest character Marvel has ever attempted." He said "Don't answer me now, but instead of making the fans wait until 2017, there's something that would be a brilliant idea, we think you could be the only person who could bring the emotion to this very challenging task. Don't answer me Vin, don't answer me, let me send over my conceptual art."

Someone in the office heard the concept and said "You're crazy, that will never work." He sent over the art, I took it home and I went into the living room with my children and opened up this huge beautiful book of conceptual art, and I asked the children "Which character do you think Marvel wants daddy to play?" and my three year old immediately pointed to the tree. As we get older we lose a little bit of that innocence, and the intuition fuelled by that innocence. In some way it was my three year old who greenlit this concept. jump cut to a couple of weeks ago when we're watching the movie for the first time. This was the first movie I'd ever taken my son to see. We all know that moment, the first movie we see with our children or with our parents is always sacred. It was a wonderful, memorable time. And when we were driving home after watching the movie, we're going down this long, tree-lined road and my son is looking out the window at the trees. He said "Daddy, daddy, it's your brothers and sisters." Who in a million years would have imagined that you could play a role that would allow your children to look at the very trees as relatives. How profound. How tomorrow. How deep. This is a role that felt like the most challenging role one could ever present, one where you can't use your facial mannerisms or body physicality, a role where you're limited to only three monosyllabic words. It was for me a challenge, as a thespian and an artist and somebody who has been acting since he was seven years old, that I couldn't turn down. I just felt the challenge of it: how do you create an emotional character, how do you create a character arc when you're limited in that way?

Thanks again to Vin for taking the time to talk to me.

And credit to James Gunn for writing Groot so well and giving him so many interesting, characteristic things to do. Having spoken to a good number of the lucky folk who have also seen Guardians, I know that a lot of my peers consider Groot to be the best thing in the film. They're wrong, it's Rocket, but I know where they're coming from.

More from the Guardians of the Galaxy and their ringleader, writer-director James Gunn, as the week goes on. The film is released in US cinemas on August 1st and UK cinemas that all-important one day earlier, on July 31st.