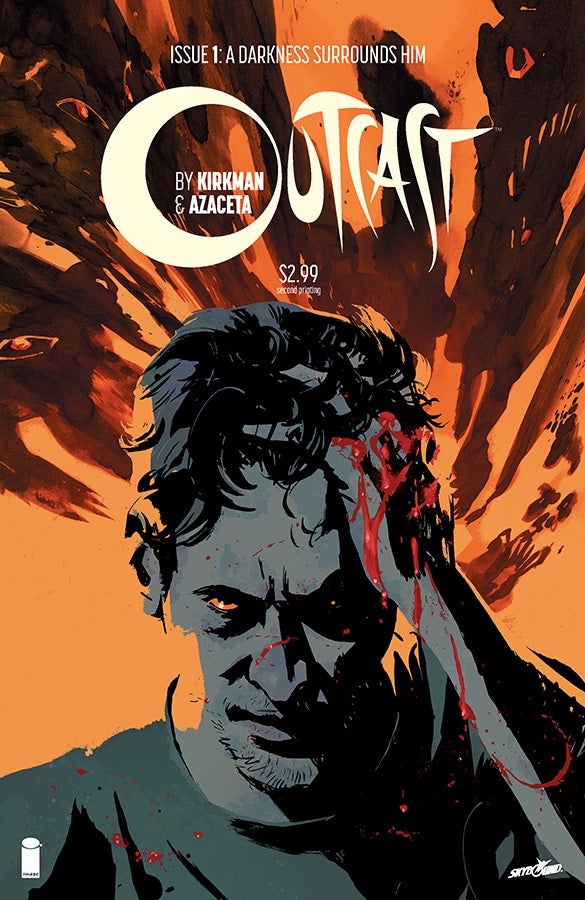 Robert Kirkman and Paul Azaceta's Outcast outsold The Walking Dead in the direct market last month, making it the top-selling Image Comics title for June 2014 and one of the top ten titles in the comics industry -- but it didn't appear on the best-seller list released by Diamond Comics Distributors.

That's because, as reported by Bleeding Cool, the Diamond chart lists The Walking Dead #128 as the 9th-best selling title in the direct market for June and Outcast as #11.

The trick is that Outcast #1 had a print run of 86,000, and sold out of that quickly, but it qualifies for returnability, which means that Diamond assumes a 10% return will occur and pegged sales estimates at 10% lower than the actual numbers.

The story also correctly notes that no one is returning the comic, which is set to become a TV series from Kirkman and The Walking Dead producer Gale Anne Hurd -- that it's selling for a $10 markup already on eBay and that Image received 4,000 orders they couldn't fill for the comic, resulting in the highest second printing they can remember in more than a decade.

Image Comics, though, isn't particularly upset by the fuzzy math, opting instead to focus on how well the title did without comparing it to other comics.

"It is what it is. Diamond has their way of calculating the chart information, and though it strikes me as a bit incomplete and arcane, that's how they distribute that information," Image Comics Publisher Eric Stephenson told ComicBook.com. "I've never understood the point of excluding UK sales data from the overall numbers, but none of this is anything new and with a book that debuted as phenomenally well as Outcast, I don't know that we have any cause to complain. I mean, the whole method behind Diamond's market share calculations is to emphasize dollars, but the main goal for us is to reach more readers, so it's pretty cool to have a $2.99 [book] with no variants or gimmicks move as many copies as we did."

Of course, that's fair enough for this particular title but the practice itself remains in place, and it isn't as though Outcast is the only book affected. Retailers love the practice of making books returnable, as it makes it easier to take a chance on a new or low-selling title without killing their bottom line -- but when a publisher takes that leap of faith in their book, they're dinged for it on the sales charts, potentially reducing visibility to readers or making the comic seem like less of a success story. The latter is actually more significant than it sounds on the face of it since, especially with smaller presses, fans tend to bolt at the first sign that a title isn't a "hit," because of years of experience with mid-level-and-below indie books being cancelled before they got their groove.

That second printing of Outcast #2 will be in stores on July 23 and can be ordered using Diamond code MAY148172.