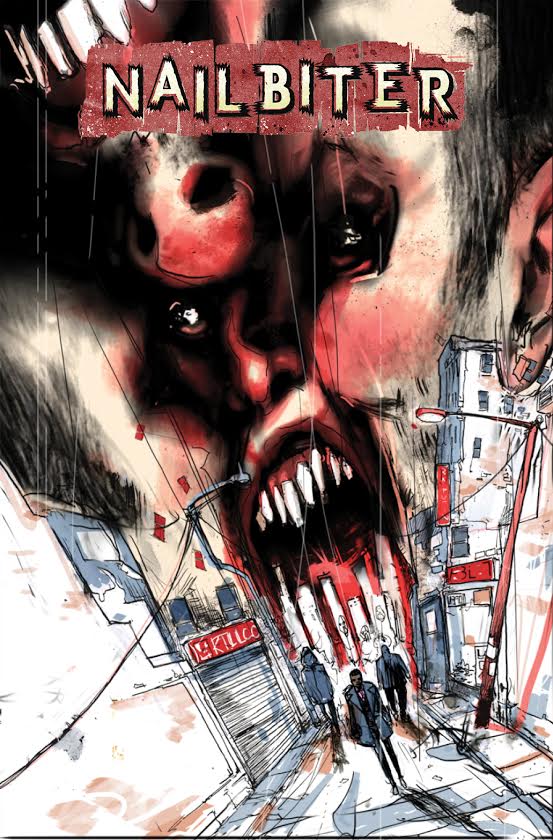 Image Comics has provided ComicBook.Com with an exclusive look at Nailbiter #11 and the variant cover by Riley Rossmo. Nailbiter #11 will be in stores on April 1st.

Rossmo's cover shown above is a beautiful encapsulation of both the issue and series. Everything from the twisted perspective to the colors creates a sense of foreboding and horror. Just like the series' very first cover drawn by Mike Henderson, Rossmo manages to simultaneously repel and compel readers with his image. It is a gorgeous piece of design work that speaks to something truly repulsive. The skyline of Buckaroo, OR is morphed into the bottom jaw of some nightmarish vision threatening to consume the heroes walking the road before it. All of this summarizes the tone of Nailbiter wonderfully, but also speaks to themes of conspiracy and the consumptive nature of violence that run through the series.

The variant cover is far from the only reason to pick up Nailbiter #11 though. Writer Joshua Williamson and Henderson have crafted an issue that brings the story to a dramatic precipice and provides new readers an opportunity to easily access Nailbiter. The issue picks up with disgraced army interrogator Nicholas Finch in the home of the titular serial killer, Edward Charles Warren. He is picking up on the investigation of his friend FBI Agent Elliott Carroll regarding why so many killers come from this one small town on the West Coast. It is a mystery that has been teased and prodded at throughout the first ten issues. Mysterious underground tunnels, underwater temples, and other enigmas have all hinted at something terrible. Nailbiter #11 addresses the need for resolution directly.

Williamson isn't prepared to give readers the answers quite yet, but he's more than ready to ratchet up the tension and tease a big reveal. Nailbiter #11 is entirely focused on the mystery that lies beneath Buckaroo and the madness it has caused and inspires in others. Two different perspectives are applied to the painful pursuit of knowledge, and as the inevitable moment of truth draws closer the story continues to grow more and more tense. By the end of Nailbiter #11, I was chomping at the bone to read just one more panel.

Henderson's work is integral to the mounting excitement of the issue. He keeps a tight focus on the characters, never allowing readers to escape from the encounter between Finch and Warren. There is a deep-seated resentment in everything they say and do, that plays perfectly across even the more subtle expressions and actions of the scene. The highlight of Nailbiter #11 comes in the form of a 40 panel spread cutting between two incredible tense scenes. It's fast paced, high impact storytelling that will have readers pulling their legs up as they prepare to turn the page. It's a great moment in an issue full of them.

For anyone interested in checking out Nailbiter,this issue provides a great point to get started with the series accompanied by a beautiful Rossmo cover. It's a tightly paced thriller of a story that won't let you rest until Nailbiter #12 lands. Be sure to pick it up in stores on April 1, and pre-order from your local comic store by March 9.