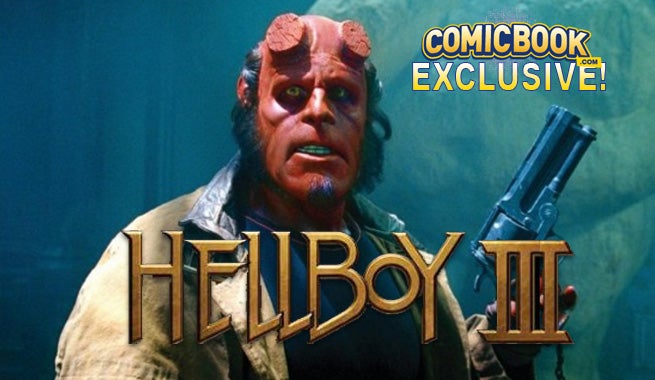 It's been 7 years since Hellboy was last on the silver screen but the franchise has certainly not been forgotten. Earlier this week, Ron Perlman began rallying the fans to get behind Hellboy III. He needs all of our help to get Hellboy III moving and properly conclude Hellboy's story.

After seeing Perlman's "#HellboyIII" tweet, we reached out to see if we could help spread any more word and get the project moving. Today, we spoke exclusively with Hellboy himself, Ron Perlman, about where the movie stands and how you can help bring Hellboy III to life.

CB: On Wednesday you were trying to rally fans for Hellboy III, where does it stand right now?

RP: It’s not dead. It’s not alive. I’ve been talking about this now for a couple of years, every opportunity I’ve got and I don’t know what prompted me to put it out there on Twitter the other day. But the response has been pretty dramatic. It’s very heartwarming. People should definitely take notice - the people who care about fanbases and stuff like that. After all, those are the guys who make what we do possible. I really, I’m just completely overwhelmed and thank you for your help. I know you caught on to what I was doing and actually enhanced it.

Yeah, well as soon as we saw your tweet we wanted to get the word out there. Speaking of the fans, what can the fans do to help get Hellboy III moving and bring it to life?

I think what they’ve been doing the past couple of days. I mean, in 48 hours since I dropped that post, I’ve never seen… I’ve been on social media for, I guess, a couple of years, Facebook very recently, I’ve never seen anything with a response to this degree. So, this struck a nerve and the fact that there is a nerve to strike, is one pawn. You have to absolutely take that into account. The fans are doing what they’re supposed to do. Anybody who follows me has been quite vociferous about their passion for seeing this trilogy evolve to where it was meant to evolve to, including yours truly.

I bet! Hellboy himself wants to get back in action, I bet he’s eager. I spoke to Doug Jones earlier this morning. He wants to do it. He told me to let you know Dougie is sending some love.

Dougie is pure love. I’ve never met a guy who is as bright a human being as this guy. He emanates love from his every pore. I feel his love constantly and I hope he feels mine. We absolutely adore one another. We’ve been on this journey together. It’s a very specific one. I can’t tell you how specific it is... How blessed we’ve been to have made it especially alongside the genius of del Toro.

Speaking of del Toro, he’s hinted a couple of different things about Hellboy III. One of those is Hellboy needing to become the Beast of the Apocalypse to defeat his main foe. Is this something you’re still aiming for?

Well, Guillermo has been very deliberate to not tell me anything because he knows what a big mouth I have. I’m fine with that but he has hinted at certain things that are kind of obvious. Shelby has been summoned into our world with one purpose. It’s almost like he’s a Greek oracle. It’s something one can negotiate one’s way out of and his purpose was to destroy mankind. That’s his purpose and the fact that he was brought up and nurtured to utilize his powers for positive effects rather than negative ones is a big discussion. That’s what makes the Hellboy discussion compelling. It’s this classic nature versus nurture dialectic. The Oracle is so vast, though. There’s no wiggle room in it. He’s destined to do this.

Obviously, it’s gonna be this internal struggle within himself as to who wills out here. Then we you have the birth of these two twins, seeing how they figure into the story, seeing whether they come out as demons or humans or permutations of both, there’s an awful lot of things that have been set up in the first two films. Don’t get me wrong, I’m not looking forward to spending 4 to 6 hours a day in make-up and about 16 hours on the set, playing this guy, but I really feel like we have an obligation to finish this. We asked the patience of an awful lot of very devoted fans. We’re clearly not the biggest blockbuster financially that ever came down the pipe with other comic book movies, but I think all that’s bulls—.

I think we asked fans to come along on a journey with us and there was a promise made that we would complete the journey. The reason why I go about this is that I feel like we’re obligated to. I don’t care how much the movie costs. If it costs $600, let’s finish the f—king story and then movie on. It doesn’t have to cost a gazillion dollars. It’d be nice if it was as epic as what Guillermo has in mind and that would take some resources but the fans have shown this amazing devotion and passion and intensity. Guys like you and me, we can do stuff to raise their voices and show these guys, yes, there is an audience. As long as they believe there’s an audience, that’s how checks get written.

That’s a fact. That’s how it works in Hollywood.

Another thing Guillermo hinted at was Hellboy dying by end of the third film. I know you can’t say much about what will happen but would you be okay with saying goodbye to the character in such a permanent way?

Let me be very clear - there will not be a Hellboy 4. The only reason I’m obsessed with making Hellboy III is because it was always meant to be a trilogy. At the end of III, the story should conclude. I’m not for open ended franchises. I’m just one for if something was meant to be done in three acts, you can’t stop at the end of the second. That’s like blue balls, you know?

I couldn't agree more. We need some closure.

I’m just speculating here because you’re the one that brought the fact that HB might not make it to the end of the movie, I mean… How else could he neutralize the Oracle? But to sacrifice himself? Maybe there are aways… Guillermo’s much smarter at story telling than I am but I wouldn’t be surprised if that’s one of the options. I don’t know how else he gets out of this. It’s destiny. I’m not trying to break news to you, though. Clearly, I don’t know.

The only one that really, really knows is Guillermo. And the only one that should make this film is Guillermo. It’s very rare that you have the guy who makes the first two installments… and has a take on this saga… That could even compare to him. It’s a question of finding the time. It’s a gargantuan effort. These movies are not easy to make. They’re very time consuming and they require a great deal of energy and focus and commitment. Even though what you see is 90 minutes of fun, years go into it. I know I’m not asking anything… I know this is a big ask but I wouldn’t be asking if I didn’t feel like there was an obligation to the people who want to see it.

Before we end this discussion... The bottom line here... Do you think that with fan support we can get Hellboy III moving?

I don’t know. There’s a lot of variables. I felt like it was.. I’m not a young guy anymore. There’s no reason for me to keep my mouth shut when I have a strong opinion about something. Most guys my age are retiring, so… I’m just running my big mouth. That’s all I’m doing. The chips will fall where they may, I have no control over this. I do want to make it clear to the world at large, as far as Ron Perlman goes, there is a huge will and desire to finish this.

Is there any super hero or super villain you would want to jump into after Hellboy?

I really believe that after Hellboy there is no reason for me to entertain that idea. Hellboy was kind of tailor-made for me. He’s an underachiever. He’s a complete miss. He loves pizza, beer, smoking cigars, hanging out. He’s got his own dirty laundry and fifty five cats. You know, this was like a love letter to Ron Perlman and a lot of what Guillermo did when he was trying to merge the character that Mike Mignola created into a traditional comic world in making him three dimensional, he borrowed a lot of my own sick, twisted personality traits. It made it look like I wasn’t acting. He’s the only super hero I’ll ever need to play or I will ever want to play. And I’m way to old to entertain playing any other thing anyway. I’m almost way too old to finish this trilogy. I would prefer to not do Hellboy III from a wheelchair.

Perlman's attitude is contagious. The passion he has for giving Hellboy the proper trilogy it deserves can be heard in his voice while he describes it.

Get on Twitter this instant and use "#HellboyIII" to help bring Hellboy's conclusion to theaters. You can also send them to Perlman, @perlmutations.

Do you want to see Hellboy's third act?

Will There Be a WandaVision Season 2?