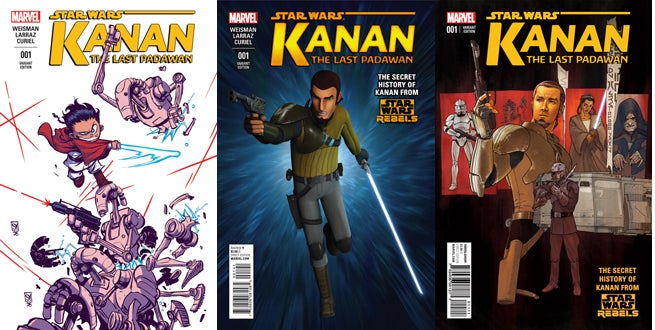 A long time ago, in a galaxy far, far away… Marvel Comics launched their Star Wars line, and as it turned out, dominated the comic book industry.

Indeed, Disney's opening salvo in their Star Wars push after purchasing Lucasfilm in 2012 has been met with success in the comic book direct market, after already launching a new series of strictly in-canon novels and the new animated series Star Wars Rebels, which received a second season order early in the first. When Marvel Comics was announced as taking over the license that Dark Horse had held and used extensively for over two decades, fans and industry watchers didn't know what to expect.

Marvel's launch has far exceeded any expectations, with the debut in January 2015, Star Wars #1, officially charting at 985,976 sales via Diamond Comics Distributors in the U.S. according to ICv2, an industry tracking website. That number tops the 1,000,000 mark when other sales routes and international sales are tallied in, making it the best selling individual comic book since 1992 saw Spawn #1 hit 1.7 million, and X-Force #1 a staggering 5 million copies. At 985 thousand, Star Wars #1 is the best-selling comic of the Diamond-exclusive era, since the company became the sole distributor of comics to North American stores in April 1997.

But they didn't stop there. The second launch, Darth Vader #1, did over 300,000 in sales to North American shops (the official totals for February 2015 have not been released by Diamond as of press time). Princess Leia #1, the third comic launched in the line, topped 250,000 copies.

Now, ComicBook.com can confirm that Kanan #1, the April 1st-launching comic that serves as a spin-off prequel to the animated series Rebels has reached over 100,000 in sales via Diamond as of today's Final Order Cutoff date. Unlike the others, Kanan #1 is limited to only four total covers; there were over 60 for Star Wars #1, 17 for Darth Vader #1, and 18 for Leia #1. That's four consecutive launches in six digits, and depending on exact numbers, that should put Kanan in or very near the top five of releases for April. In January, after the far and above #1 of Star Wars, only three other comics crossed the 100k mark: two issues of Amazing Spider-Man - #12 & #13, and Batman #38. Indeed, they were the only four issues over 75k.

The real test will of course come with the second issues of these respective series. Wolverine #1 launched in February 2014 with about 89k sales. Wolverine #3, in March 2014 (the series double-shipped in February), was at 40k. While the drop off will definitely be significant for the flagship series, the industry will keep a close eye on what kind of drop-off we'll see for the other series, which debuted with slightly more realistically sustainable numbers. Regardless, this is a line-wide launch that proves a few things: licensed comic books can be huge, Star Wars excitement is at a fever pitch right now, and if this is any indication, with a relatively small and insular part of the entertainment industry to have this kind of response, then Star Wars: The Force Awakens in December 2015 should be historic.