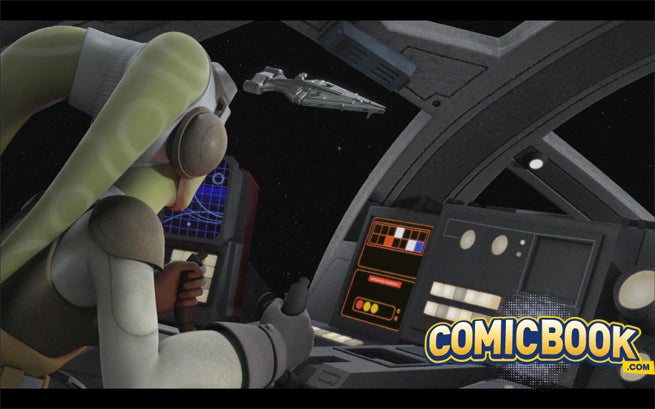 Sure, Star Wars Rebels is taking a week off - there's no new episode on Monday, February 16. That's the bad news. The good news is, we have an exclusive clip from our friends at Lucasfilm Animation to help tide you over, and it is all-action.

Hera has been bold before, sure, but taking on what looks like an altered Imperial Acclamator-Class Assault Ship in the Ghost? That's a special kind of crazy only our Rebel crew could pull off. After Kanan was captured by the Inquisitor, Grand Moff Tarkin, and Agent Kallus last episode, the crew mounts a mission to get him back. In this clip, we see Hera in a Ghost crewed by Zeb and a mystery droid (Ezra's at least around too), while Chopper, incognito and having infiltrated the Imperial vessel, is hoping for a daring rescue.

Watch the whole clip for a hilarious moment from the rambunctious little droid, too. Check out the clip, then scroll down for a first look at the official description of the new episode.

Here's the official description of the new episode from Lucasfilm Animation:

Despite a secret informant who insists the rebels go into hiding, Ezra secretly plots to rescue Kanan from the Imperials in an all-new Star Wars Rebels episode "Rebel Resolve!"

With Kanan being held by Grand Moff Tarkin and the Inquisitor, Ezra resolves to rescue his Jedi teacher in direct defiance of Hera's orders. Using Chopper disguised as an Imperial courier droid, the rebels infiltrate the Imperial communications network to find out where Kanan is being held – and the infernal planet he's being taken to.

Jeffrey Huet, Marvel and DC Inker Who Worked on Planet Hulk, Has Died