Terry Moore's next issue of Rachel Rising is on deck and we still haven't talked about #25. Meanwhile, the latest issue of Previews gave fans a look at SIP Kids, a new one-shot that reimagines the Strangers in Paradise cast as kids on the playground.

As always, Moore joined us to talk about both, the future of Rachel Rising and what's next for Strangers in Paradise.

As a reminder, these conversations are spoiler-heavy. If you haven't read Rachel Rising #25 yet, go buy it and come back to read along with us. 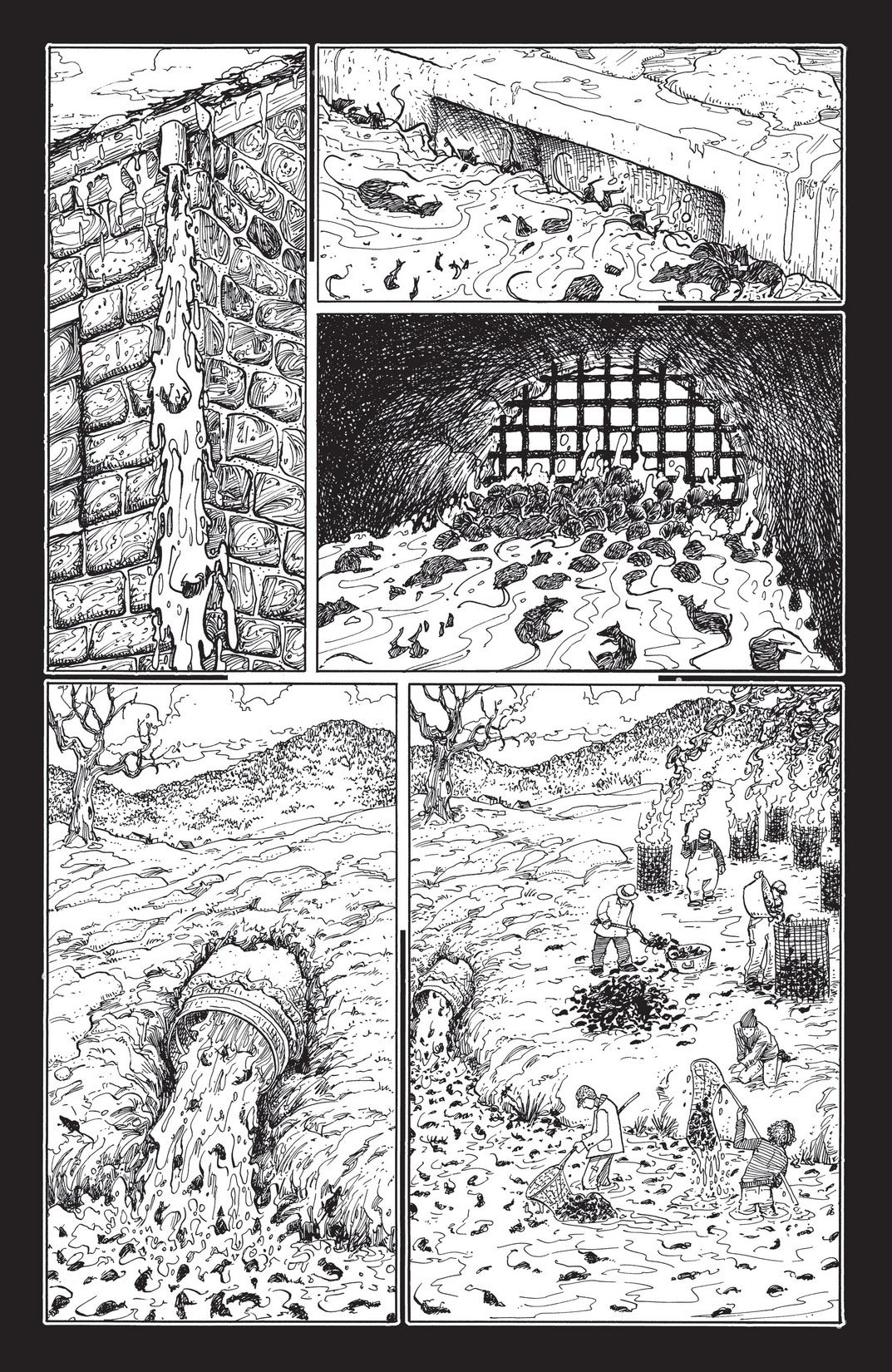 ComicBook.com: I love this cover, but obviously we don't see these characters. That isn't the first time recently you've done that (it happened with the "picnic" cover, at least). Is that just establishing a tone for Manson?

Terry Moore: Yes. Just a glimpse at an ever expanding world of creep, a peek at all the stories and characters I could explore in Rachel Rising. It's like when Rod Serling walks through the Night Gallery and you see all those images and we pick one for the episode.

ComicBook.com: The opening sequence with all the dead rats feels a bit like a bookend on the sequence where all of the rats were introduced -- one of the series' most disturbing. Was that a creative choice or am I just projecting?

ComicBook.com: What the heck does the rest of the community think happened? Obviously our heroes know, but...there are just people out there scooping up rat carcasses and burning them by the hundreds, and we get no dialog to see what's up in their heads.

Moore: Maybe they think they're in New York? There's a newspaper headline in issue 26 that says Rat Harvest. That's what they think. 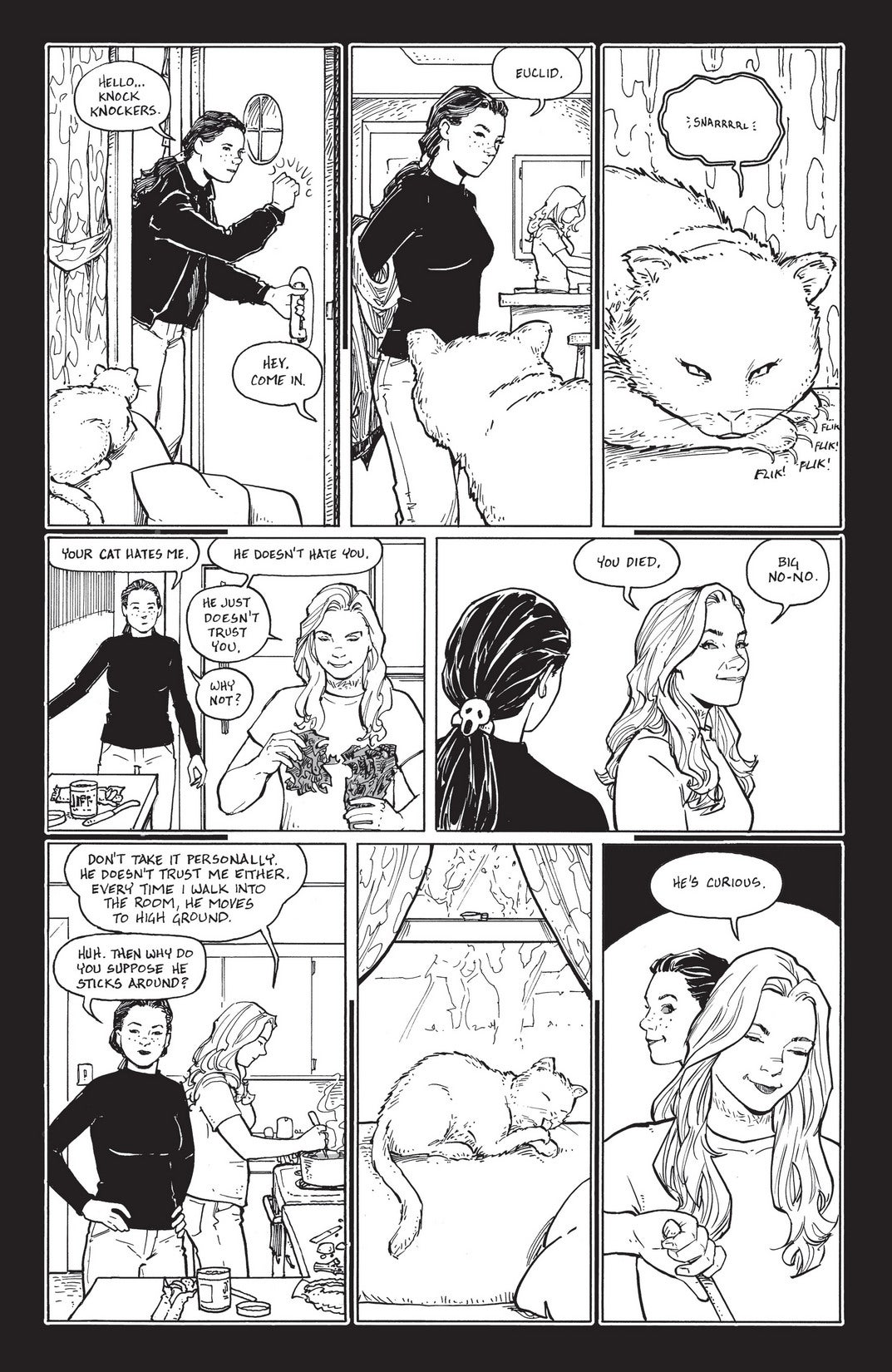 ComicBook.com: We get some great character moments between Jet and Rachel here that are the first time we've not seen them in emergency/panic mode in quite a while.

Will we get to see a bit more of the two settling into their new status quo, or is it going to be right onto the next crisis?

Moore: Uh, spoilers. But my favorite parts of superhero series was always when we saw their personal life between crisis. Doing their laundry, checking on friends, making lunch. It reminds you—oh, they're "real" people. That makes the crisis more intense. Wipe on, wipe off.

ComicBook.com: In the "godawful Joker faces" panel, Jet really kind of looks like Zoe does when she gets going. was that intentional?

Moore: No. Just coincidence I guess.

ComicBook.com: I like the fact that you've got either a pair of rat eyes, or two bubbles in the liquid that resemblle a pair of eyes, in the middle of all that lighter fluid. It kind of drives home that, messed up as her approach was, Zoe was right about the more humane way of killing them in a way.

ComicBook.com: I also think you managed to sell the "walking away from the explosion" bit well. That's something I haven't seen done in a comic before. What made you decide to try that out?

Moore: Because that's what happened out there. It's my job to capture it the best I can. And I've seen about a million too many action hero explosion walk-aways. Now they're just corny—the kind of moment little girls reenact in the backyard. She even did the beat-heavy metal soundtrack. Rock on, Zoe. 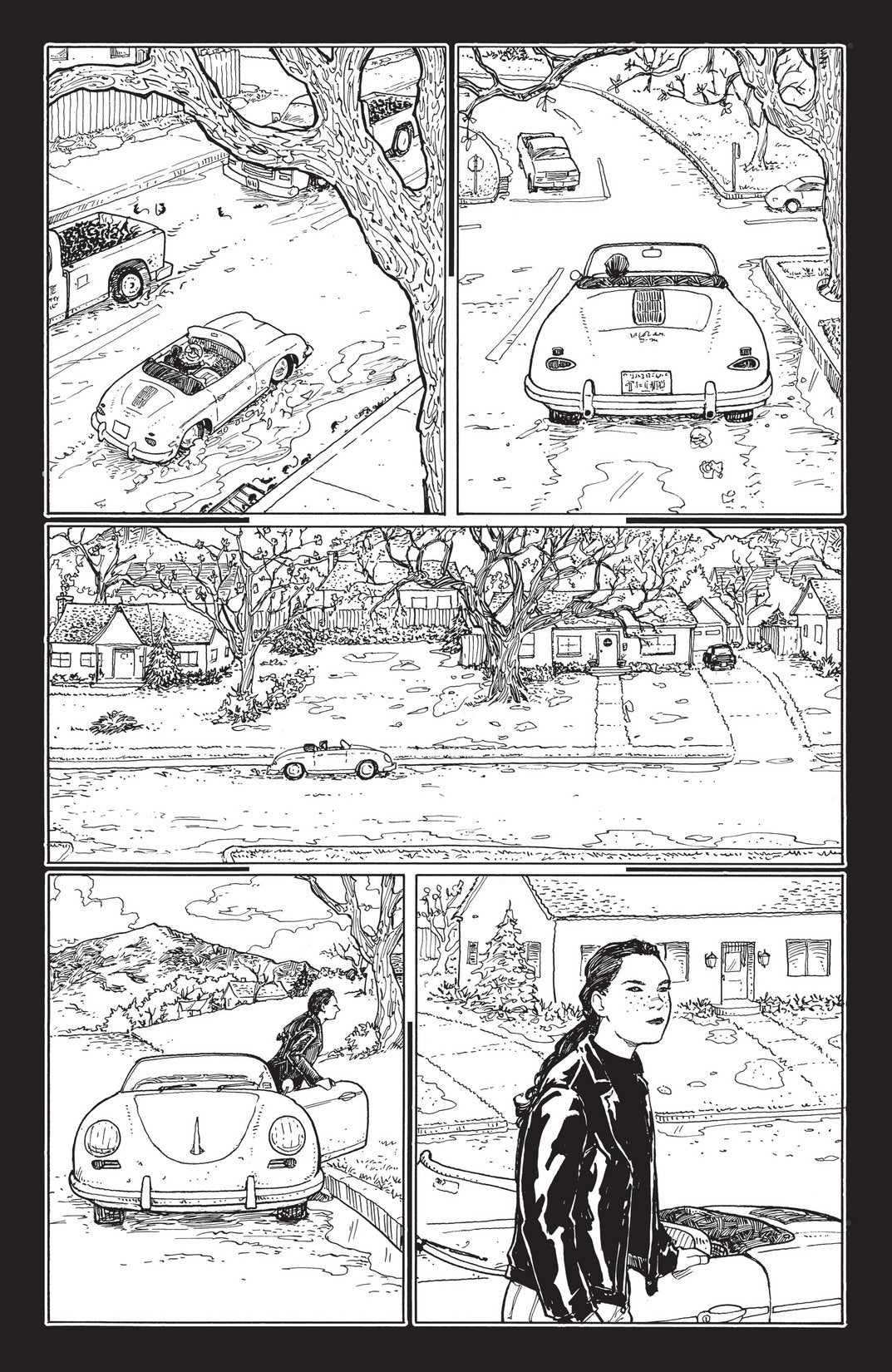 ComicBook.com: Zoe has really come into her own as a kind of demented comedic foil for the stars. When did that come to you?

Moore: It didn't. It just grows from the seeds I start with, like nature.

ComicBook.com: Is Euclid scared of Aunt Johnny? Obviously her "resurrection" was a bit different than the others. I don't feel like she's still dead, per se.

Moore: Euclid is a good litmus test for who's what. Aunt Johnny doesn't freak "him" out.

ComicBook.com: There's a real odd couple relationship forming between Johnny and Zoe. Will we see more of that coming up?

Moore: They're the same age, with an odd detail of difference. They should be able to easily communicate on some level, but Zoe is still trapped inside a 10 year old and has to filter through that. Makes things interesting.

ComicBook.com: Where did Jet get that Scream hair ornament? I love it.

Moore: She got it at the Manson Five & Dime. It's a cheap Halloween pin she hot glued to a hair clip. She's very creative.

ComicBook.com: There was a real emotional weight to the revelation about Carol this issue. Was that planned from the time she turned on them or did it come after?

ComicBook.com: Did you always have the spell chest planned as an "out" so that you could fix some of the more obvious, gruesome injuries? Having lead characters in an adventure story who never heal can certainly be a liability…

Moore: I always knew she would repair with the Old World herbal remedies from the chest. But, notice she didn't want to repair the ligation whelp on her neck. Hmm.

ComicBook.com: I also love the touch of Zoe's chair (and I had one just like that, so I remember how often stuff would get stuck under it) crushing the dozen or so rats. You can be a messed-up fellow, has anyone ever told you that?

Moore: Every day of my life. 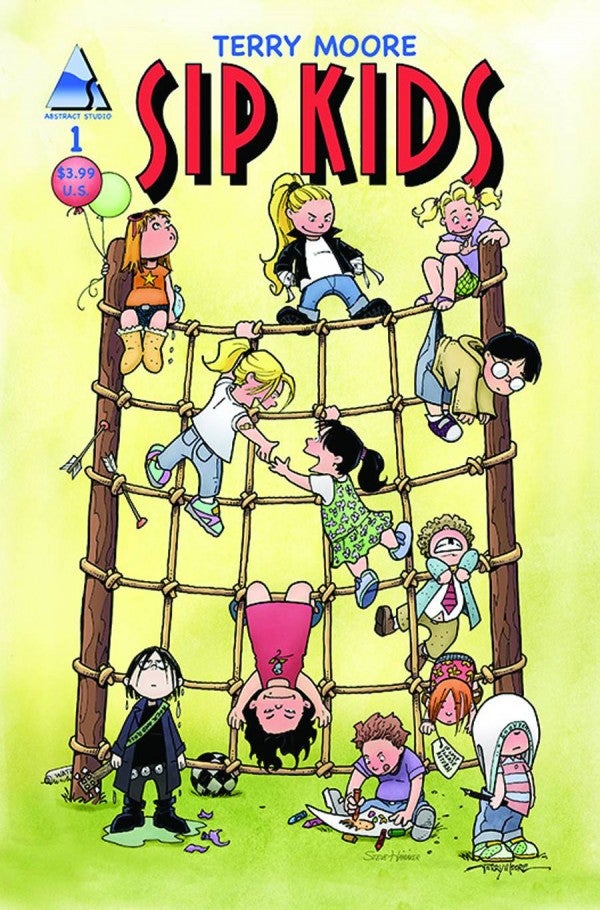 ComicBook.com: Can you tell us a little about SiP Kids? What was the genesis of that?

Moore: Ever since I drew scenes of the cast as kids in Strangers In Paradise #33, I've wanted to do more with that. My favorite moment in SiP is in #33, when 6-year old Freddie and Casey have a divorce fight. Watching those words come out of those faces is just priceless, and character revealing. So it's a cartoonist goldmine. How could I resist?

ComicBook.com: With convention season in full swing, are you starting to look forward to the fall, when you can focus a little attention on the SiP novel?

Moore: Absolutely. Conventions are important—you have to get out there and connect with the community—but I could be happy living on a mountain top making books and watching the yeti play. Silly yeti.

ComicBook.com: Since we're on other projects, have you heard anything about movement on the Rachel Rising TV adaptation, or is that still more or less where it was when we talked three or four months ago about it?

Moore: I have no news for you yet. We are working on it. It's a complex process.

ESPYS 2022: WWE Moment of the Year Nominations Narrows Down to Elite Eight

Michael Mann Wants to Adapt Heat 2 Into a Movie