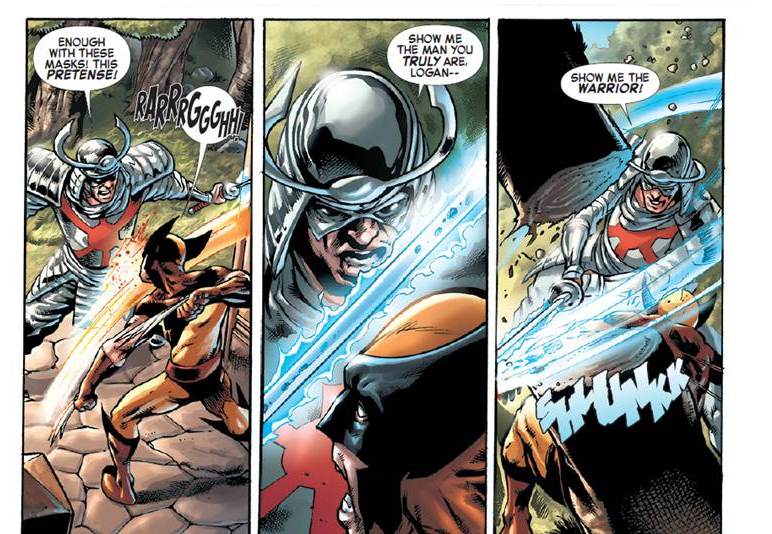 hits Blu-ray on Tuesday, December 3 and on the disc is a special digital comic. ComicBook.com has an exclusive sneak peek at an image from the comic, co-written by Marvel Comics legend Stan Lee, for our readers to check out above.

Marvel Studios created this exclusive Wolverine Infinite Comic,  written by Jason LaTour and Stan Lee for Fox Home Entertainment to offer as a promotional item as part of the home entertainment release for the James Mangold-directed film.  CinemaNow and Sony Playstation are the two Digital HD Retailers who are offering the Infinite Comic exclusively with the Wolverine Unleashed Extended Edition, starting with sales made as far back as November 19.

The Infinite Comic in which Wolverine faces off with the Silver Samurai, one of the film's villains, includes a custom Infinite Cover + 15 story pages (approx 60 or so screens of content); it's available via Marvel’s WhiteLabel Reader with Redemption Code Process in Blu-ray packaging, and codes will be included in both The Wolverine Unleashed Extended Edition Blu-ray and 3-D Blu-ray.

The character is also, as you can see above, pictured in his Claremont/Miller-era yellow-and-brown costume--a variation on which almost made it into the film, and was used as a prop for the press at a recent screening of The Wolverine Unleashed Extended Edition.

The Wolverine Infinite Comic features a cover by In-Hyuk Lee. The interior art was storyboarded by Daniel Govar, penciled by Manuel Garcia, inked by BIT, and colored by Marta Martinez.

Digital comics redemption codes are becoming a popular throw-in with many comic book movies on Blu-ray and DVD (including The Avengers and Iron Man 3), but it's the rare film that creates original content to package with the movie. When Marvel's The Avengers came to home video, a (print) original graphic novel was created to accompany the release, and a digital comic prequel accompanied special pre-orders of Man of Steel.