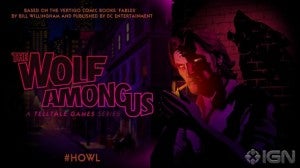 Following on the heels of their massive success with a video game based on Skybound Comics's The Walking Dead, reports that Telltale Games would finally fulfill their promise of taking on a game set in the world of Bill Willingham's Vertigo series Fables have been circulating for a while. Now we have confirmation in the form of a title and premise for the game, as well as the first piece of promotional art, from Telltale themselves (via IGN). Titled The Wolf Among Us, the story follows Bigby Wolf, the lovable badass of the series and husband to Snow White. Why they chose to drop the title of the comic form the title is not clear. "Developing The Wolf Among Us based on the Fables universe has allowed our studio to build upon all of the hallmarks of what makes our episodic series so engaging for players," said Telltale CEO Dan Connors. "Through an evolution of our approach to choice and consequence, we can further explore the complexity of each and every iconic character in a universe rich with untold history from the darkest sides of the storybooks."