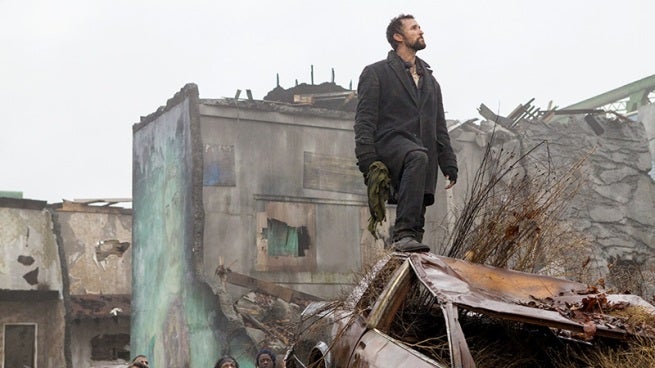 "The Eye" opens with a shot of the "Eye in the Sky" patrolling the prison ghetto. Tom and throws a rock from the roof of solitary to test the gate. A Black Hornet attacks a woman with a child trying to find extra food. A man dressed like the Ghost distracts the Hornet so that she can escape. Tom arrives dressed as the real ghost and burns the hornet. He returns and tells Dan that he has three quarters of the camp mapped out, but still can't find where the guards are coming from. They're both abruptly thrown out of solitary and reunite with Tector and Hal. The Eye in the Sky drops a harnessed human into the camp, who delivers a message. He says that there will be no more food drops until the Ghost is turned over, offering rewards for those who turn him in and execution for those that aid him.

Dan tries to convince Tom not to turn himself in. They think finding Pope and taking his stash might be a short term solution. Tom and Hal discuss the plan to escape. Hal tells Tom that the plan has changed, that he knows someone who can get them out.

Anne's group is marching onwards. They've been marching non-stop, despite Anthony's attempts to get Anne to let them rest. A skitter pops out of the bush and Anne shoots him, though he's still alive when she's done.

Roger and Ben discuss Lexi in Chinatown. Roger says she's dying from her advanced aging and he can't figure out her hybrid DNA, but that he can't get close to her anymore because of Lourdes.

Matt is continuing to fake his way through reeducation. He receives a note that says "same time after lunch." Sheila is "graduating" to find and root out her parents and whoever they're with.

Dan is tracking Pope through the ghetto. Pope leads him into a tunnel and swings a bat at him. Dan wants Pope's stash. They were followed by some other men looking to take Pope's stash for themselves. A fight breaks out. Dan nearly strangles one of the men to death. He and Pope leaves.

Hal introduces Tom to Dingaan. Tom takes interest in his radio. Dingaan tells Tom about how he lost his family in the invasion and has been escaping from different camps. He tells them they'll need a Faraday suit to escape. He tells Tom that he saw a tether outside camp that may be a power source. The construct a plan to cut the power and create a distraction so everyone can escape. They realize they need to get to the Eye in the Sky to find out why the guards are staying near the church.

Pope and Dan are talking and Pope reveals his stash was only eight cans of beans. They're about to start fighting until they hear a sound.

Tom uses Dingaan's radio to reach Cochise. Cochise can't get them the food they need, but can tell them where to find food if they escape. He also tells them that the Espheni are building a power source that will allow them to go on "offense." He also believes he's found Matt at a camp in the South and agrees to try to rescue him.

Denny translates a conversation between Anne and the Skitter. The Skitter tells her that they're being brought for reeducation to be part of the new order, led by "the hybrid." Anne believes he means Lexi, loses it, and kills the Skitter.

Ben is trying to get into to see Lexi, but Lourdes gets in the way. Lexi comes out and lets him in, but Dr. Kadar has to stay outside. Lexi tells Ben about stopping the mech. Lexi gets angry when Ben questions Lourdes' intentions and a wind kicks up as she throws books at Ben. She calms and it dies down. Ben reminds Lexi about the war, but Lexi says she remembers. Lexi agrees to see Dr. Kadar.

Tom rides out as the Ghost in plain sight and unmasks himself, purposely trying to get himself taken onboard the Eye in the Sky.

He's taken onboard. They know Tom's name, as they speak through the harnessed human. They offer Tom a place as a leader to defeat a coming, greater threat. They reveal the Black Hornets are former rebel Skitters and trying to develop a much more elite soldiers using human adults.

Pope and Dan follow the sound and find an underground part of the wall.

Several others dressed as the ghost begin attacking the Eye. The Espheni in the eye is confused about how there's more than one Ghost. Tom sees guards come out of an underground hatch and figures out how the fence is powered.

Matt and Mira go to the dorm for a meeting and find it abandoned. Matt tells Mira to leave and she does. The team leader comes in and tells Matt that Skip graduated. He says he sees potential in Matt and will be keeping an eye on him.

Dr. Kadar is checking up on Lexi. He takes a vial of blood. Lourdes shows up and tries to take the blood. They start fighting and Lexi starts to get upsetting, causing things to move, a screeching in everyone's ears, and her vial of blood to explode.

Later, when Lexi is resting, Maggie and Ben talk about what happened. They're not sure what to think. They're both worried Lourdes is using Lexi and agree they should keep Lexi away from anyone they're not sure they can trust. Ben goes to check on Lexi and finds her bed empty.

Anne's people are resting. Anne apologizes to Denny for killing the Skitter while she was still connected. Denny says that when he they talked about the hybrid, Denny saw a blackness in the west that kept getting bigger and bigger. They decide to head west.

Ben spies Lexi talking to someone and trying to give back her powers. It turns out to be an Espheni. She creates the three-circle symbol that she wears around her neck in the air.

Tom goes back to the ghetto as another food drop arrives. Dan shows up and tells Tom and Hal about the underground tunnel he found. Tom tells them about the deal he made, that they won't' fight or riot. They're confused, but Tom says they're getting all the way out.