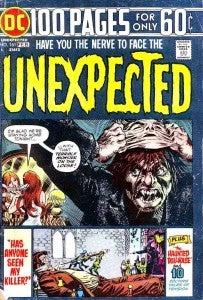 Nick Cardy, one of the most influential comic book artists of the 1950s and '60s, is in a Florida hospital, friends and family say.

Yesterday, Perhapanauts artist Craig Rousseau told fans via Facebook that Cardy had been admitted to the Intensive Care Ward, and asked for thoughts and prayers.

Shortly thereafter, Perhapanauts writer Todd Dezago, who had spent all of Thursday sharing spooky Cardy covers for Halloween, shared a status from his niece, who said that Cardy's heart and lungs had fluid in them and that Dezago had flown down to see him at Sarasota Memorial Hospital.

After all those great Halloween covers he scared us with the other day, the biggest scare my pal Nick (Cardy) gave me was calling me from the hospital. 94 years old, his health took a turn a few weeks ago when he got a cold that, despite assuring me was going away, only got worse. He lost his appetite, several pounds, and is in congestive heart failure, where he's having difficulty breathing and talking.

I am here with him at the hospital now and updating him with everyone's prayers and well-wishes, which brings a smile every time. Thanks for your warm thoughts.