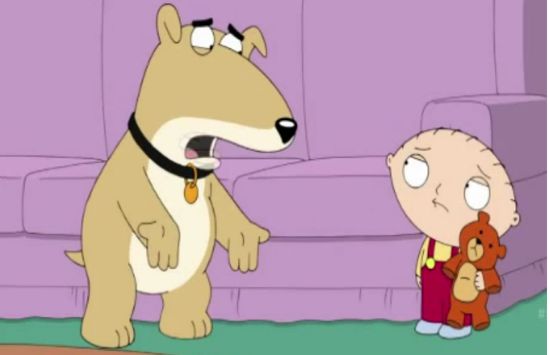 In all the euphoria over the triumphant return of Brian Griffin on Family Guy, it seems to have been lost what the ultimate fate of Vinny the Dog might be. As far as the storyline in the “Christmas Guy” episode, when Stewie went back in time to save Brian Griffin, it wiped out any need for the Griffin family to go looking for a new dog. Vinny the Dog presumable still exists, but he’s never met the Griffin family.

According to reports, Tony Sirico signed  a six episode deal to voice Vinny the Dog with an option to do more episodes. If those reports were accurate, then Sirico has three more episodes left in his contract. Given that the death and return of Brian Griffin was something that was planned out months in advance, Seth MacFarlane had to know exactly how many episodes that they would need Vinny the Dog for in the death of Brian storyline.

Why would Fox sign Tony Sirico to a six episode deal if they only needed him for three? It certainly suggests that at some point in the future Vinny the Dog will return. Could Vinny the Dog return as someone else’s dog? It is known that Cleveland Brown will return to Family Guy sometime this season. Perhaps, in a twist, Vinny could be Cleveland’s dog.