The big news over the last couple of days is that Brian Griffin will be returning on the December 15 episode of Family Guy, which is entitled "Christmas Guy." The news comes from an Entertainment Weekly report, which cites two pieces of evidence. One piece of evidence is that the official tagline of the episode opens the door for Brian Griffin's return. The Family Guy tagline for the Christmas Guy episode states: "Stewie devises a master plan to get the one and only thing he wants for Christmas." Of course, Brian Griffin's name isn't mentioned anywhere in the tagline. This tagline isn't really evidence. It's merely a theory that has been circulating online, which we reported on Comicbook.com a couple weeks ago. The second piece of evidence offered up by EW is that Brian Griffin's name is on the character cast list for the "Christmas Guy" episode. Well, guess what? Brian Griffin's name is also on the character cast list for the "Into Harmony's Way" episode, which airs tomorrow on December 8, 2013. Here's the "Into Harmony's Way" character cast list, straight from FOX.com. Voice Cast: Seth MacFarlane as Peter Griffin, Stewie Griffin, Brian Griffin, Quagmire, Kermie Jr, and Kermit; Alex Borstein as Lois Griffin; Seth Green as Chris Griffin; Mila Kunis as Meg; Mike Henry as Cleveland Brown; and Patrick Warburton as Joe. Guest Voice Cast: Conan O'Brien as himself; Nick Kroll as Ricky; Carrie Fisher as Angela. So if EW's theory that Brian Griffin's name being on the list of character means that he's returning, then Brian Griffin will actually be returning this week instead of next week. Do we think Brian Griffin is returning this week? Probably not. He doesn't appear in any of the advance images released by FOX. Plus, Vinny the Dog, who is voiced by Tony Sirico, is not listed on either the main or guest voice cast list. Reports indicate that Tony Sirico signed a six episode deal. The fact that he's not listed on the cast list suggests to us that FOX merely hasn't updated the main cast list. If FOX merely hasn't updated the main cast list, then the fact that Brian Griffin is on the "Christmas Guy" character list means nothing. Does this mean that Brian Griffin won't return on the "Christmas Guy" episode? Not necessarily, EW could possibly have other evidence that they are not stating in their article. As previously reported by Comicbook.com, there are future episodes, which do indicate Brian Griffin being part of the storyline, so it is likely he will return at some point. It just may or may not be the "Christmas Guy" episode. 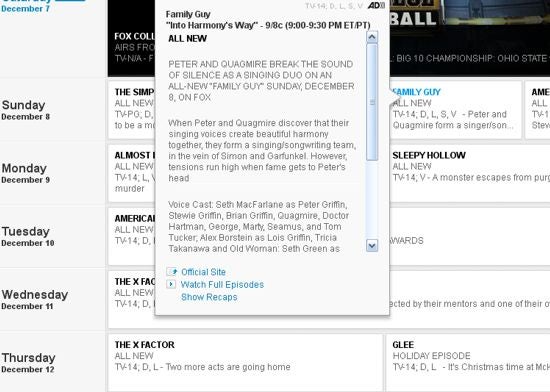