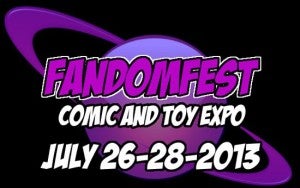 If you missed out on Comic-Con in San Diego last weekend, then never fear because Fandomfest will be going on this weekend in Louisville, Kentucky. Fandomfest is bringing together over fifty top celebrities from comic books, movies, and TV shows. There are some huge names that will be appearing, and Comicbook.com will covering the event live.

Fandomfest is July 26-28th at the Kentucky International Convention Center and the Galt House Hotel. Fandomfest is expected to draw a crowd of over 50,000 fans, and the economic impact for Louisville has been projected to be over $2,500,000. In order to give back to the community, Fandomfest is also working in conjunction with the The Dream Factory of Louisville, Inc, to help make a wish for a child come true.