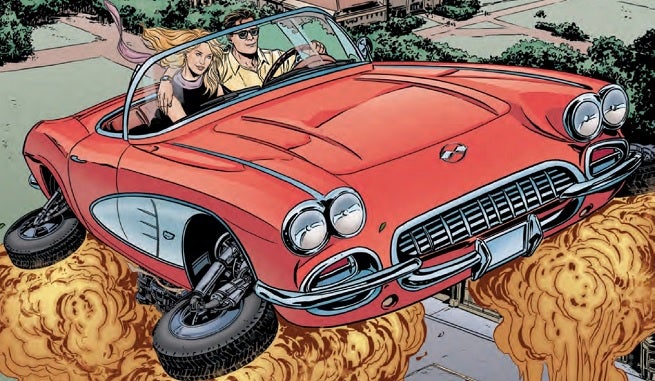 Continuing the hitherto excellent run on Fantastic Four that writer James Robinson, artist Leonard Kirk, inker Karl Kesel, and colorist Jesus Aburtov have constructed, this issue leaves me slightly less elated than past entries and with a few lingering questions. Some of this stems from the revealed motivations of the arc’s central villain and some arises from the slight shifts in the artwork. In addition to the primary creative team mentioned above, we get to see a flashback with art from Marc Laming and colors by Lovern Kindzierski. Additionally, a second colorist, Tamra Bonvillain who, unless I am very much mistaken, takes care of the last seven pages of the issue. 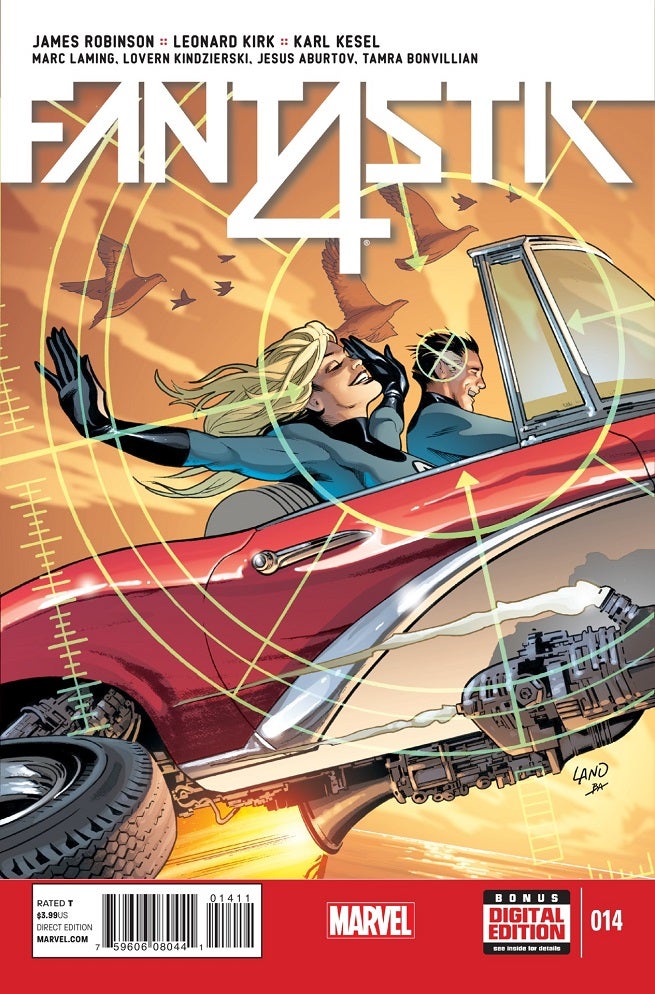 The issue opens with the flashback from Laming and Kindzierski. Laming provides some great art here as he depicts Reed’s college days at Columbia and his budding romance with Sue Storm. He renders anatomy, architecture, and what appears to be an early prototype of Agent Coulson’s beloved Lola (an approximation of a 1962 Chevrolet Corvette) very well and with a good amount of detail. I particularly applaud his use of Kirby krackle in a science scene. His rendering of the Quiet Man with his face obscured by a small whirlwind of smudges is a very nice touch as well which makes sense once one learns more about the character’s backstory. The coloring in this section by Kindzierski works very well, particularly in selling this as a flashback. The colors are nicely muted, almost autumnal in a way, which helps to distinguish it from the rest of the comic.

I’m still not entirely sold on Laming’s linework in his inks which for lack of a better term seems to have a harshness or angularity to it. I would also say that his Reed Richards has a touch too much “self-assured hunk” going on but given that this is the Quiet Man’s memories that would make sense given how he views Reed and the perceived slight that Reed did to him. In all other aspects, this art is pretty unambiguously successful.

Kirk’s pencils with Kesel’s inks are uniformly excellent as they have been throughout this series. I will say that things look a touch rushed in the last few pages but I’m not sure if this is due to the pencils and inks or the colors. What I take to be the transition from Aburtov’s color work to Bonvillain’s (whose last name is spelled differently on the cover and the credit’s page so please excuse me if I have selected the incorrect one) is possibly the most intriguing visual element of this comic. While Bonvillain’s work is by no means bad or lacking, seeing the contrast here just emphasizes the deftness and skill of Aburtov’s work as well as the degree to which he is helping to add depth and detail to the artwork. 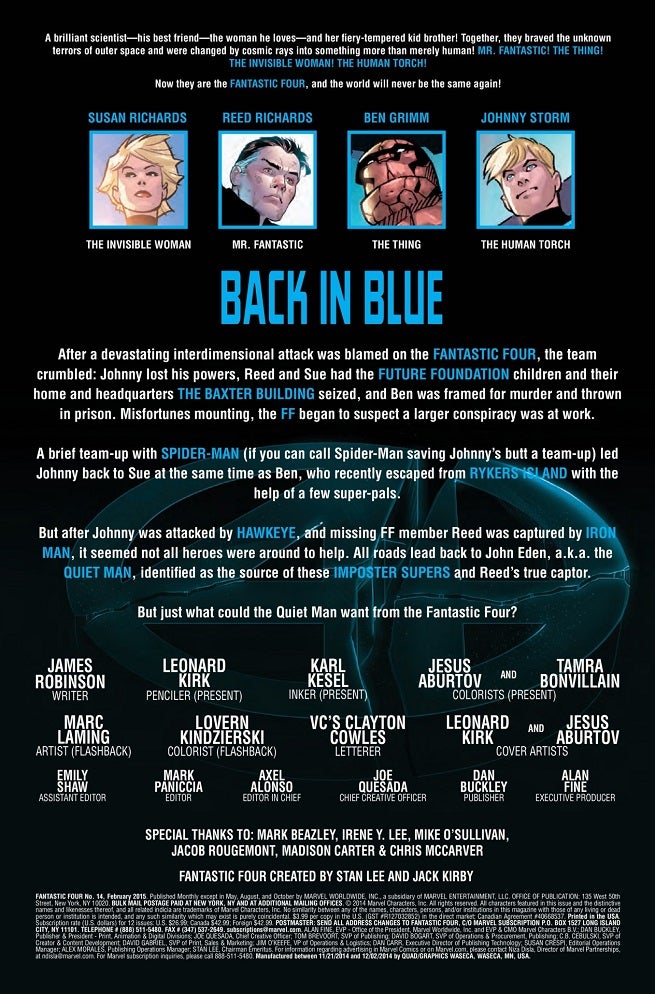 If one wants to get a sense of Aburtov’s ability and the value he brings to this series, one need only look at the page where the Quiet Man’s visage shifts from a generic goateed individual to that of district attorney Aiden Toliver. Try to imagine the page with just the inks and one begins to see the depth of Aburtov’s contribution. Shadows add shape and form to the faces while the rosier hues add a warmth. Simply looking at the amount of work that Aburtov put into building and defining Toliver’s nose I find to be quite impressive. I believe that I’ve made the point before but as much as I love Kirk and Kesel’s work (and I do), Aburtov is a real asset to this series and helps tremendously to make the artwork something special.

Turning to the story, it’s time for a SPOILER warning!!!

This is a good issue. It advances the story on all fronts, the villainous Quiet Man is brought front and center, there’s action, there’s interesting character work with Bentley 23, and it ends with the promise of a confrontation in some form with the Invaders. The thing that leaves me a bit cold is the Quiet Man’s motivations. Is it just me or is it slightly cliche to have a villain attacking because he had unexpressed and thus unrequited love for a character in the distant past and he now wishes to take out his frustration on the object of his affections and her family?

Apparently, the Quiet Man was in love with Susan Richards back when she was still Sue Storm and Reed was in college. Seeing Reed steal her heart, the Quiet Man (QM) stayed silent. Apparently, over the years QM was always in the background pulling strings and sending villains to attack the FF or creating opportunities which would prompt villains to attack of their own volition. Given his clandestine activities and always remaining in the shadows, his adopted moniker should make perfect sense. Part of what has allowed him to accomplish all of this is something he invented, nanite-derived facial reconstruction which allows him to change his appearance at will. He has gone so far down the rabbit hole that while he seemingly has tons of identities that allow him to accomplish his ends (such as that of the aforementioned Toliver), he can no longer recall his own name or face.

While I am still very much intrigued to see where all of this is going and more than a little excited for the revelation of QM’s grand plan, which seemingly involves the reality-altering powers of Franklin Richards, there is something about his status as a vengeful, lovesick puppy dog that leaves me a bit cold. There’s nothing objectively wrong with it and there is something intriguing about the notion of a villain hounding the FF from the shadows since their creation depending on how it impacts things going forward and the remainder of QM’s plan, but personally it doesn’t sit particularly well with me. Obviously, your mileage may vary.

Oh, and I’d be remiss for not thanking Robinson for tossing in a Ben Grimm “What a revoltin’ development.” He’s still got the voices of these characters down pat.

In the final analysis, this is a very enjoyable and visually engaging comic. Even with my reservations, I recommend it wholeheartedly. As it seems that the FF aren’t going to have their own title for very much longer, I suggest getting your fix now on which is still a wonderful run.

Fantastic Four #14 Review: No, John Wayne Isn’t In It