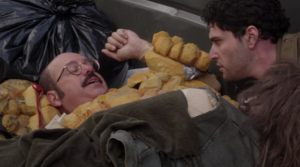 Earlier today, ComicBook.com reported on the new season of Arrested Development, and the fact that The Fantastic Four (and in particular the movie rights to the storied comics franchise) play a larger role than you'd expect in the Fox/Netflix co-production. Well, something escaped our notice that was interesting enough to double back for. Thanks to Craig at KSite TV for pointing it out. Some commenters on our social media site had speculated that the discussion of 20th Century Fox making a Fantastic Four movie simply to keep the rights in play might have been perceived as Arrested Development thumbing its nose at Fox, who currently have a reboot of the franchise in development by Chronicle director Josh Trank. And it might have been--inasmuch as Fox shows like The Simpsons and Arrested Development have a history of making fun of the "evil" and "incompetent" Fox network. Some, though, believed it could be something bigger and more mean-spirited than that--an intimation, perhaps, that the current FF movie is also being done as a crass cash grab.

That perspective is a bit of a stretch, obviously, since Arrested Development is still a Fox property, even if the current season is being produced and distributed by Netflix. All you have to do is look in the copyright section at the end of the credits--or the big Fox logo that comes up a couple of seconds after the last credits roll--to know that. You know what else you'd see in the credits? Josh Trank.

That's right--when Tobias is at his lowest point, sleeping beneath a DumpSter dressed in a shabby Thing costume because he can't get out of it, he's served with a lawsuit from the Fantastic Four's rights-holders (referred to in the series as Stan Lee and Marvel Enterprises) for unauthorized use of their trademark. The subpoena comes from a bum who is using Tobias's padded suit as a pillow when Tobias wakes up. That bum? Josh Trank, director of the upcoming Fantastic Four movie.