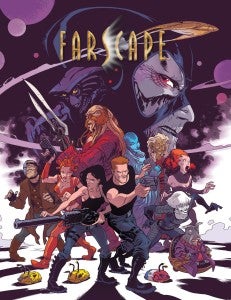 Buried in a press release announcing the upcoming (November 5) release of a complete-series Blu-ray set for the cult hit Farscape is the announcement that a mini-comic by Eisner winner Ramón Pérez will be included, via Archaia Entertainment, with each set.

To enhance the collectability and celebrate the series’ 15th Anniversary, Cinedigm partnered with comic publisher, Archaia Entertainment, to include a 16-page mini comic book created by the same team that made Jim Henson’s acclaimed graphic novel Tale of Sand.  Based on the prequel Peacekeeper Wars, the comic is written and illustrated by Eisner Award-winning artist Ramón Pérez (including all new cover art), colored by Ian Herring and lettered by Deron Bennett. It also includes select images from The Jim Henson Company’s archive and an exclusive interview with Brian Henson revealing never-before-shared facts about the Farscape Legacy.

The cover of the comic is found at right. The Blu-ray is on the stands next month and retails for $149.95.