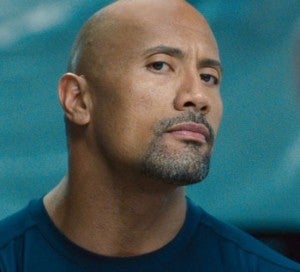 In an early part of the movie, Roman Pearce finds out that they are going to be doing a job for Luke Hobbs, who is played by Dwayne "The Rock" Johnson, and he quips, "So now we work for the Hulk?" Later in the movie, Hobbs pays a visit to an office responsible for a group of surveillance cameras, and one of the managers jokingly refers to Hobbs as "Captain America."

The final Avengers reference comes in the form of a phone call. When Hobbs telephones Tej Parker, Parker's caller ID flashes Hobbs' name as the "Samoan Thor." In the course of the movie, Hobbs is referred to as three of the Avengers. We're surprised there wasn't an Iron Man reference, but maybe we missed it.

One of the things that makes the Avengers Eater Eggs referring to Dwayne "The Rock" Johnson very interesting are the recent rumors that The Rock could be up for a Marvel Studios role. Mavel Studios President of Production Kevin Feige had some very nice things to say about The Rock, and The Rock tweeted a hint that he was interested in playing Luke Cage.