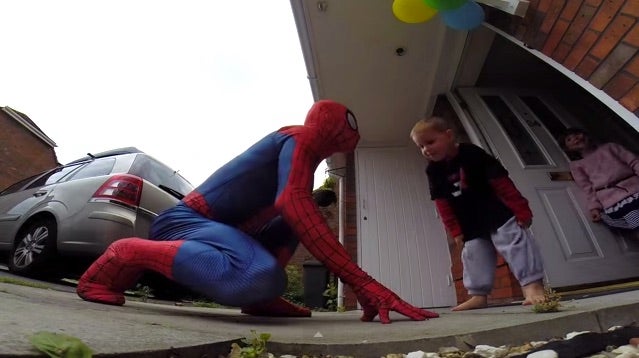 The father whose "Spider-Dad" video went viral online late last year, has put together a short film for his son Jayden, who passed away from cancer shortly after.

Jayden was diagnosed with a Grade Four Brain Stem Tumor in September 2013, an illness that generally gives victims just one year to live. Not long after, his father dressed as Spider-Man to give Jayden a chance to meet his favorite superhero.

Wilson set up a GoPro camera outside his front door, and had his wife bring Jayden outside. Then, Wilson jumped off of his roof in front of Jayden, giving his son the ultimate birthday surprise. Wilson asked Jayden how he’s doing, and how old he was turning. Giving Jayden a big spider-hug, Wilson then carried his son back inside to the birthday party.

“He's such a little hero and we want the world to know about his journey,” Wilson said at the time. “As well as to see the Spider-Man video and generate inspiration from it, so that kids have dreams made realities.”

You can check out a video below, and click through to his YouTube page for more details on how to raise funds in Jayden's memory.