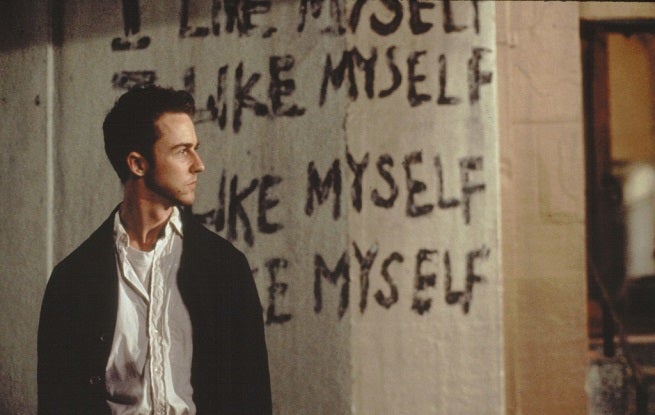 I am Jack's conspiracy theory.

A new fan theory suggests there was even more trickery going on in David Fincher's 1999 film adaptation of Chuck Palahniuk's Fight Club than previously believed -- and it's going viral after Palahniuk shared it to Facebook last night with the note that fans would thank him later.

The theory, posited at JackDurden.com, is that while the film reveals Tyler Durden to be  a split personality created by the anonymous narrator's stress- and insecurity-addled brain, there are other things in the film that also don't exist.

These include, according to the theory, Marla Singer, Robert Paulsen and the Paper Street House itself. Without Paper Street, of course, it's arguable that more or less the entire film is a delusion on the part of the narrator.

Among the highlights of the theory -- it's worth a read, whether or not you agree with the idea -- are the idea that Bob (with his removed testicles and hormone-induced breasts) is an intermediary step in the narrator's mind between himself and Marla, and that Tyler saved Marla from suicide because her death would kill all of them.

Even the image above is credited as being a "clue" to the theory since the "I like myself" is written four times -- that being, one for each personality competing inside the narrator's head.

Fight Club: Is This What Was Really Happening In The Film?

Whoops, We're Not Getting New Marvel Content Every Week This Year After All