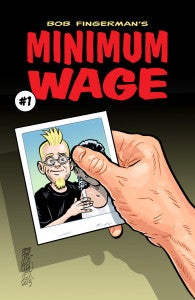 Having recently finally collected the whole series in hardcover, celebrated cartoonist Bob Fingerman is returning to Minimum Wage next year in a new, ongoing titles for Image Comics.

The series, based loosely on Fingerman’s own life, follows the life of the main character Rob as he stumbles through life in New York City. Minimum Wage, a critically-acclaimed series with a battery of celebrity fans, set the standard for cringe comedy before The Office was a thing and remains a favorite among entertainment luminaries like Robert Kirkman, Patton Oswalt, Marc Maron and Trey Parker.

Earlier this year, Image Comics released the definitive hardcover collection of the series, Maximum Minimum Wage and after what's described as "an overwhelming response" to the collection of previously-released issues, Fingerman said the time was right to return to his definitive series.

"Working on the massive Maximum Minimum Wage, just going through all that material, stoked my desire to return to these characters,” said Fingerman. "I'd deliberately given that chunk an open ending, thinking someday I'd come back and do more. Now seemed the perfect time and Image Comics seemed the perfect place."

Launching in January, 2014, Minimum Wage #1 will pick up the story of Rob three years later, where much has changed in his life. When we last saw him, he was exchanging vows with his girlfriend Sylvia. Now he's single, owns a cell phone, lives with his mother again, and is giving some thought to diving back into dating. What could go wrong?