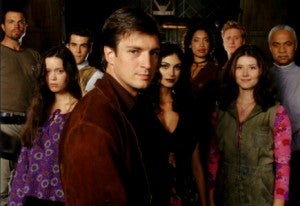 A number of press releases were issued this afternoon to promote a surprise tenth anniversary celebration of Firefly happening at San Diego Comic-Con International in two weeks. The panel, which will feature Joss Whedon, Nathan Fillion, Adam Baldwin "and the rest of the crew" of the Serenity will take place on Friday, July 13, at 12:30 p.m. in Room 20. It's hard to picture a world where this one doesn't fill to capacity first thing in the morning, so as the schedule starts to develop, look for a number of Whedonites to start cramming to see what else is in that room and how interested they are in just camping out there all morning. The official description from Science:

It has been 10 years since the crew of Serenity took flight in Joss Whedon's short-lived but now revered series, FIREFLY.  SCIENCE will reconvene, for the first time in a decade, Captain Mal Reynolds and the crew from the ship, calling all Browncoats to unite at the 2012 San Diego Comic-Con.  The cast of FIREFLY will talk about the past, present and future of FIREFLY, 10 years after its debut.  SHINY.

Besides being a hot-selling DVD collection, Firefly inspired a film adaptation, Serendipity, and a number of comic book spinoffs from Joss Whedon, published through Dark Horse Comics where his Buffy the Vampire Slayer books have mostly made themselves a home over the years. Science also used the opportunity presented by this announcement to let fans in on plans for panels in support of their other programming, including Dark Matters, Stuff You Should Know and Fox's Fringe, which will make its science debut in the fall.