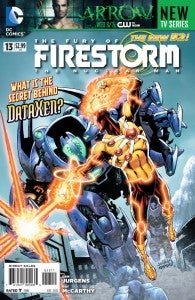 Yesterday marked the release of The Fury of Firestorm The Nuclear Man #13, Dan Jurgens's first issue on the book as both a writer and artist. The veteran creator, fresh off runs on Justice League International and Superman, takes the reins on what's frankly been a pretty rocky start to the series, with creative changes and low sales leading many to speculate that the series may have been cancelled with #0. Instead, DC Comics handed the book off to Jurgens, who takes the character back to his roots--roots, of course, that don't really exist yet in terms of the New 52. Jurgens joined us to talk The Fury of Firestorm The Nuclear Man #13, and the where he hopes to take the series. This is, you've said here and elsewhere, a kind of de facto #1 for the series. Is that part of why the subtle title change happened? Very much so. On top of that, I wanted to signify that there is now just one, singular, unique Firestorm. So, yes, it's now called "The Fury of Firestorm the Nuclear Man" as opposed to "Men". 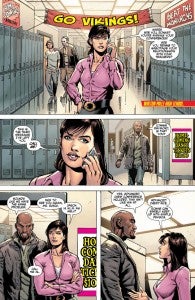 The parents are getting close right away--which is better, actually exploring their relationship or exploring what such a relationship could do to Ronnie and Jason? It's equal! I think any child of a single parent is struck by who their mother or father might be dating. When it's the parent of a friend-- particularly someone who you're connected with as Ronnie and Jason are-- well... that's fertile story material. And, on top of that, there should be a great deal that connects Jason's father and Ronnie's mother. Now, DataXen is pretty formidable to be a throwaway. Is this a beastie that will keep coming back for more after this issue? Yes. This is not one of those disposable robots. How do you imbue a robot with enough "personality" to make it worth bringing back? It has to be a combination of power, personality and motive. In this case, motive is a huge part of the agenda. 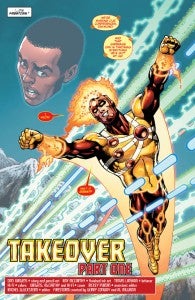 I never really thought of it--there has always been a fairly minimal amount of football talk in Booster Gold, but this is the first time you've really had a chance to run with those metaphors in a big way, right? Or am I forgetting something? Yeah, that's probably true. But it makes sense. For Booster, football is part of his past life-- part of a life that he wanted to walk away from. For Ronnie, it's very much part of his active life. In terms of wanting an athletic scholarship to college, it represents a ticket to the future. As people get older, it tends to be a bit harder to write for young characters. Is it any different doing so now than, for example, writing Teen Titans when you and George Perez did it in the mid-'90s? Not really. Over the past few years, I've had quite a few kids of that age hanging around the house. Their manner of speaking and concerns aren't foreign to me by any means. Is it a little different writing for teenagers now that you've had them for a while? Your kids aren't quite old enough to have been Titans back then. It probably is at that. There's a higher degree of familiarity at this point. A greater awareness of what the problems and issues might be. 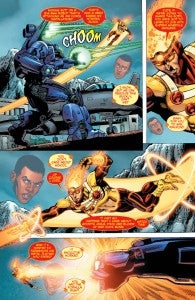 I really like the idea of Jason being Ronnie's "tutor" as Firestorm, telling him when he's on the right track with the formulae and the like. Is he kind of a stand-in for Professor Stein in that way? Absolutely. I think of Ronnie as the pilot and Jason as the navigator. Ronnie is headstrong and ready to charge into anything while Jason is the voice of reason. "I've had it with these metas" is an interesting comment--it's almost that veiled racism you get in X-Men titles about mutants, isn't it? It's kind of like, "If you lived in a world where these people were just a fact of life, and they were always breaking stuff, some people just wouldn't have any tolerance for it, and they'd have by extension no tolerance for the entire class of people with those powers." I don't know about that. I do think, however, that it's consistent with what we see in the New 52. Let's be honest-- trouble follows these guys everywhere and there has to be some, if not a great deal, of doubt about what and who Firestorm actually is. Is there one of them? One hundred? Are they good? Bad? A mix? 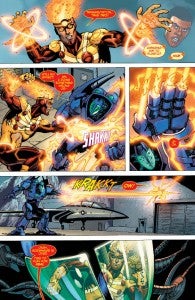