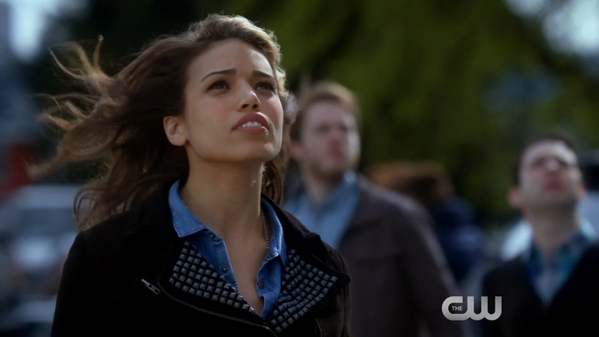 During The Flash’s season finale, DC Entertainment teased the next major superhero to enter their CW universe: Hawkgirl.

Appearing on the streets of Central City during the episode’s climax, Hawkgirl’s civilian alter ego, played by actress Ciara Renee, was spotted amongst the panicking public.

Whether or not Renee’s character is already Hawkgirl in this scene, or will become Hawkgirl later on in Legends of Tomorrow, remains to be seen.

According to Flash Executive Producer Andrew Kreisberg, the cameo came in at the last minute. Here’s how he explained it.

Honestly, it was a last minute decision. I read somewhere online, it said, “CW confirms Hawkgirl not in Flash season finale.” I said, “That’s so weird that the CW put out this thing about it. I don’t remember anyone asking us about that.” Literally, when I read that, I was like, “Well, why can’t she be in the finale?” It really wasn’t part of it, but we already had this sequence designed where we were going to go around the city and have everybody look up into the sky and see the singularity. We were up there shooting the Legends presentation, so Ciara was going to be there anyway. I asked our line producer, “Look, I know this is last minute, but is there anyway we could stage her as part of the crowd?” We picked up that shot. It’s just so much fun for us because it’s just yet another glimpse at what the future of these characters are going to be. We’re so excited to be working with Ciara," he told Entertainment Weekly. "To have that first glimpse of her be here on The Flash was so exciting.

Cool, huh? Hawk girl will appear in full when DC's Legends of Tomorrow hits the CW.